Aoyama was known for his ruthless discipline within the Tojo Clan which earned him incredible respect from several subordinates as it gave them standards to follow and improved morale. While apparently being a man of conduct and honor in truth Aoyama is all the opposite, in fact being a power-hungry and disrespectful individual who only saw power and who would take things by force abusing the strength of the Tojo Clan for his purposes.

He is even revealed to be a deeply coward man as he sent his men do his job and used manipulation and trickery to get what he wanted rather than his own strength. In fact he is in truth quite weak and while he claims to be not one to like "brutality" like he believes Watase or Kiryu to do, it is simply that he is a very weak fighter with a fragile will as he had to resort to firearms to do any "fighting" and even begged for mercy as he was being pummeled.

Aoyama was known for his strict code of conduct enforcing harsh and severe punishment to those who acted outside the rules of the organization and engaged in any sort of misconduct, earning the respect of many inside since it gave them discipline and raised morale on the clan.

In truth he is revealed to be plotting against Daigo's back believing the idea of an alliance with the Yamagasa family to be absurd, he would be set on ruining the negotiations and take over Fukuoka by force. He is eventually revealed to be the sworn brother of Masaru Watase of the Omi Alliance, the two being on contact and keeping tabs on Kazuma Kiryu's movements.

He eventually set a meeting with the leader of Yamagasa family, Tadashi Madarame in his residence, where he planned to kill him but failed as Madarame was aware of Aoyama's true colours and acted faster, although Madarame was still injured by a knife. Kiryu would storm the place along with Yuu Morinaga and Masato Aizawa. Morinaga would "question" Aoyama about his supposed betrayal of Daigo's wishes, with Aoyama claiming that the old way of the Yakuza were done and that it was now a world of kill or being killed and he was simply acting accordingly to his philosophy and with the authority of being the acting chairman. Using this authority he shot Morinaga after the latter shot him with blanks. Eventually Aoyama escaped when Yahata appeared making it look like the Tojo members were to blame for the attack on Madarame, getting himself injured as "proof".

He secretly rigged a money briefcase with explosives, destroying the residence getting the pertinent excuse to engage on war with the Yamagasa family for the territory as he makes his escape on car. Eventually Kiryu has Yahata contact him by phone in order to challenge him and every member of the Tojo Clan in Fukuoka to a duel in the peers. Aoyama felt forced to comply in order to avoid rumors that the Tojo Clan fled from a minor clan and decided to call Watase as reinforcement.

During the night of the duel he sent his men while he remained back on his car with Watase expecting Kiryu to come. His prediction came true as the Fourth Chairman challenged all members of the Tojo Clan as a civilian therefore if he achieved victory over the Tojo Clan, the organization wouldn't be able to engage war with the Yamagasa family. Aoyama found the idea ridiculous but Watase forced him to comply. Aoyama sent all his men after Kiryu but they were single-handedly defeated by the Fourth Chairman. Refusing to accept defeat he attempted to shoot him down but Watase stopped him as he found his methods dishonorable and his actions would bring shame on Watase as a witness of Kiryu's victory. Aoyama complains that this wasn't what they agreed upon forcing an angered Watase to remind Aoyama that he wasn't his soldier, taking the gun from him and punching him away.

Left at the feet of an angered Kiryu he gave a sound beating to the acting chairman who begged for mercy and attempted to reason with Kiryu as he was somebody who would "never kill". Kiryu merely asked from whom he heard that and punched through the glass of his car telling him that guile can only take him so far on the yakuza world. Aoyama was left complaining about his current situation with an angry Watase having enough of Aoyama's weak character and telling him to act to his current standard as acting chairman. Aoyama reveals he was only acting as he was being told, but before he can say anymore he has his head shot by Morinaga, with whom he was secretly plotting with. 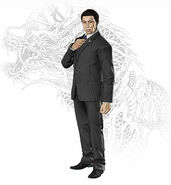 Add a photo to this gallery
Retrieved from "https://yakuza.fandom.com/wiki/Minoru_Aoyama?oldid=75503"
Community content is available under CC-BY-SA unless otherwise noted.