JB Blanc
Mitsugu Matsugane (松金 貢, Matsugane Mitsugu) is a major character in Judgment. He is the patriarch of the Matsugane Family, a third-tier subsidiary of the Tojo Clan, and a foster father to Takayuki Yagami and Masaharu Kaito. Although he is the patriarch, the financial influence his Captain Kyohei Hamura has over the family renders him its practical leader, with Matsugane being a figurehead.

Physically, he's on the stocky side. He has a graying goatee beard and a graying hair which appears to be receding. His hair used to be dark brown and is slicked back.

He wears a khaki coat over white kimono. In a flashback scene, he wears a white pinstripe double breasted peaked lapel suit with the Matsugane Family pin on its lapel over a black dress shirt, gold patterned necktie, and black oxfords.

Matsugane appears as a man who sticks to the old yakuza way of valuing reason over sheer force and violence. He also appears to be a caring, kind-hearted and an overall good-natured person, especially towards Yagami and Kaito, whom he consider as sons.

As a patriarch, his benevolent side appears to backfire, as he seems to have difficulty in controlling the family. He is revealed to have known about and tolerated Hamura’s immoral activities as he knew it was the only way to keep the family afloat, despite his personal disapproval.

Along with Ryuzo Genda, Matsugane raised Takayuki Yagami following his parents' death, going as far as to give full support for Yagami to pursue his dream of being a lawyer. Genda and Matsugane have been close friends for over 40 years, in spite of how they both operated on different sides of the law, one being a respected figure in the legal world and the other being a respected figure in the yakuza world.

In 2017, Matsugane had to expel Kaito in order to save him from yubitsume when Kaito was framed by Hamura for the theft of 100 million yen (which Hamura himself had orchestrated through Red Nose), as part of Hamura's plan to steal the money from the safe and eliminate Kaito. After that, Matsugane gradually loses his power due to the financial influence Hamura had, despite being a patriarch.

In the eighth chapter of the game, he begs Yagami and Kaito not to pursue Hamura, but is rejected. Later, he'd order Matsugane Family members to attack the duo (including Toru Higashi), but fails in his plan.

In the tenth chapter, Yagami and Kaito lure Hamura out but fall into his trap in Little Asia. Matsugane appears and demands to spare them, but Hamura says both should be killed. He shoots Kaito and brings him an abandoned building.  Then, Kaito is rescued and Hamura beaten, while Yagami and Matsugane take him to Kyorei Clan's base at Cabaret Honmauren.

In the eleventh chapter, while Hamura is interrogated, Honmauren is raided by Matsugane Family members trying to rescue Hamura. Yagami fend them off as he move to escort Hamura and Matsugane out. At this point, The Mole appeared and attempts to shoot Hamura to silence him; but Matsugane takes the bullet for him. In his dying breaths, Matsugane admits to Hamura that he had always known that Hamura had been engaging in dirty and immoral work which Matsugane himself would never do, but silently tolerated it due to how it was needed to keep the family afloat financially and saved from ruin. Matsugane forgives Hamura, and takes responsibility for looking the other way all this time, effectively pressuring Hamura into doing the things he had done.

Anger over losing his Patriarch leads Hamura to divulge the mole's identity to Yagami, and later cooperate in taking down his co-conspirators in the Advanced Drug Development Center's AD-9 conspiracy. Matsugane's funeral is held in the Tojo Clan headquarters. 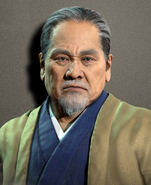 Matsugane as a younger man.