Mitsuo (三雄) is a recurring character in the Yakuza series first introduced in Yakuza 3. He is one of the residents of Morning Glory Orphanage.[1]

Mitsuo is interested in sports from a young age, playing baseball with Koji and wrestling with Taichi at Morning Glory Orphanage. He discovers a talent for baseball, which he is so talented at that he is even considered for a scholarship in the sport.

Mitsuo is the son of an African-American father and a Japanese mother. His mother raised him alone in Japan while his father returned to America, not knowing he had a child. He was taken in by Kazuma Kiryu shortly after the death of his mother.

Mitsuo gets two movie tickets and hopes to invite Riona along with him. She refuses, making up an excuse and telling Mitsuo that she has other plans. Kiryu and Rikiya decide to help him out, buying him "cool" clothes in order to impress her. but she turns him down yet again. He follows Riona into town, unbeknownst to her, and witnesses all of Riona's friends discovering the scar on her arm. Enraged at the children's' nasty remarks, Mitsuo punches one of the boys. As the other kids leave, Riona asks if Mitsuo is disgusted by her scars. Mitsuo tells her that he's different too for his mixed lineage, and Riona apologizes for blowing him off.

In Yakuza 6, Mitsuo becomes an active baseball player at his school. His skills are so well-recognized that he may earn a scholarship for it. The thought of Mitsuo's chance at a scholarship being affected by their connection to Kazuma Kiryu is primarily what drives Haruka Sawamura away from the orphanage.

Mitsuo as he appears in Yakuza 3 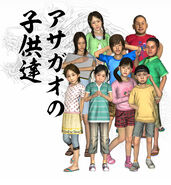 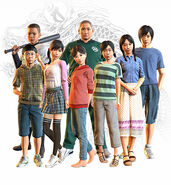