Member of the Hirose Family

Naoto Tagashira (田頭 直人, Tagashira Naoto) is a member of the Hirose Family in Onomichi and a supporting character in Yakuza 6.

When Kiryu grabs an opponent while standing near Tagashira and the player executes the Triangle button, the Tagashira's Team Heat will play. Kiryu brings the opponent up from behind, Tagashira will then wind up his fist, run towards the opponent and clothesline them. This Heat Action is shared with Matsunaga.

Tagashira has a large build. He has short black hair with the sides shaved, and wears a green hoodie with a chain.

He's both sensible and intelligent, managing to solve a riddle regarding the secret of Onomichi. He is as much of a big-hearted man as his appearance would suggest, but is also surprisingly sensible and knowledgeable, meaning that the Hirose Family members rely on him constantly. 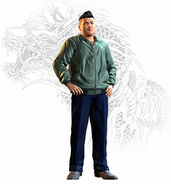 Retrieved from "https://yakuza.fandom.com/wiki/Naoto_Tagashira?oldid=75515"
Community content is available under CC-BY-SA unless otherwise noted.