The Mama of New Serena (ニューセレナのママ, Nyū Serena no mama), also known as Mariko[1], is the proprietor and bartender of New Serena.

In 2000 - nine years prior to the events of Yakuza 3 - Mama's husband, Keisuke, had been an officer working under Date. Unbeknownst to her the police had been tracking a criminal named Tsukishima. Mama was taken hostage, and Keisuke, unable to shoot for fear of hitting his wife, was shot and killed by Tsukishima before he was able to rescue her.

Date, feeling responsible for her husband's death, looked after her and eventually helped her find the Serena property for cheap after the property had been deemed "cursed".

In the substory Date's Pride, Date confesses his feelings for Mama, which she responds to with incredulity before telling him to leave the bar along with Kiryu.

She tells Kiryu that Date's past as a detective makes her think of her deceased husband, and that she does not want a repeat of the events 9 years prior, where her husband sacrificed himself for her sake.

Before Date recognizes the man who had left the bar prior to them as Tsukishima, the man who had killed her husband, Mama is kidnapped. Date insists that he go alone, but Kiryu follows regardless, meeting on the roof of a building in Nakamichi Alley; the same place where Keisuke had been shot and killed.

Date and Tsukishima face off, and Date shoots Tsukishima in the chest, saving Mama. She realizes that Date is not the same as her husband, and does not expect him to be. She says that she will consider a potential future relationship.

At somepoint after Yakuza 5 she and Date got married.

Mariko during the flashback to 2000.
Add a photo to this gallery 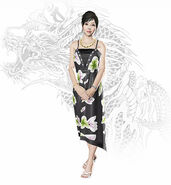 Add a photo to this gallery
Retrieved from "https://yakuza.fandom.com/wiki/New_Serena_Mama?oldid=75487"
Community content is available under CC-BY-SA unless otherwise noted.