Ono Michio (小野 ミチオ) is a recurring character in the Yakuza series first introduced in Yakuza 6. He is Onomichi's mascot.

His catch phrase is "Oh no!", due to how similar "ono" sounds like the English phrase, as well as "Nice to Michi!" using the other half of his name as yet another pun greeting.

Ono Michio wears a fisherman-style outfit with a fish on a rope to denote the town's fishing industry. His head is based on a hassaku orange, which is grown locally in Setouchi. On top of his head is a bowl of Onomichi ramen, the local specialty.

Kiryu is asked to play the part of Ono Michio in the substory "Oh No! It's Ono Michio!"  After entertaining the local kids, a group of youths try to fight Ono Michio, only to get beaten up.

The costume returns for yet another substory "The Ono Michio Show", where Kiryu must dress up and sing karaoke in the suit in front of a bar full of people in Snack New Gaudi. After Ono Michio completed the karaoke, the manager, Hironaka, gave Ono Michio his CD debut due to an agreement that if Ono Michio gets a high score in karaoke, he would get his CD debut. Kiryu is then given the sample CD by Hironaka after completing the karaoke mission. The costume returns again in the substory "Putting on a Brave Face",  where Kiryu put the costume to give courage to a kid that is facing a surgery and the kid's mother said that she won't meet Ono Michio again if she doesn't undergo her surgery. After trying to give the courage to the kid as Ono Michio, Kiryu would then face the youths who tried to fight him in the first Ono Michio substory, and beat them once again.

Ono Michio appears as a DLC character for the Clan Creator minigame. His fighting style is listed as "Dragon of Dojima."

Ono Michio appears in the substory The Ono Michio Bandit, where he appeared in Theater Square in front of a rather unimpressed audience, none of whom recognize him. The mascot is not played by Kazuma Kiryu in this appearance, and the replacement, Nishimura, seems to be less than impressed with his job.

Later, a man with the Ono Michio costume appeared in front of Yagami, running away from Ono Michio's manager, Hironaka, and Inamine, a store owner whose store was robbed by Ono Michio.

It is revealed that Nishimura quit from the role of Ono Michio and left the costume somewhere on the street and the thief used the costume to rob the store. Nishimura left the role due to the pressure he felt when performing as Ono Michio, since he felt inferior to the previous actor (Kiryu) and gave up.

The thief is then revealed to be Kaneda, who tried to cover up the robbery by ditching his sneakers that was stained by anti-theft paint balls. Kaneda tried to rob the store because his debts was being due that day, and tried to use the stolen money to pay the debts. The money he stole would then be given to Kumakura, who is revealed to be the debt collector.

After the police apprehended Kumakura and Kaneda, Inamine and Hironaka thanked Yagami for solving the case. Nishimura, now wearing Ono Michio's costume again, thanked Hironaka due to Hironaka still believing in him after he tried to quit from the role, and wanted to become a good mascot although he is still far away to match his predecessor. 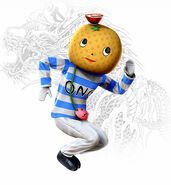 Ono Michio as he appears in Judgment
Add a photo to this gallery
Retrieved from "https://yakuza.fandom.com/wiki/Ono_Michio?oldid=82857"
Community content is available under CC-BY-SA unless otherwise noted.