Edit
watch 03:01
Wiki Targeted (Games)
Do you like this video?
Play Sound

He is the Captain of Shintaro Kazama's Kazama Family, a subsidiary of the Tojo Clan's Dojima Family that later became a direct subsidiary of the Tojo Clan following the Dojima Family's demise. He later became the Kazama Family's Second Patriarch. He also became the Interim Chairman of the Tojo Clan in Daigo Dojima's absence, and then took on a role as a lieutenant advisor following Daigo becoming the Sixth Chairman. He was also the founder of the Honest Living Association that allowed yakuza members to return to society. Many years later, he became the proprietor of Survive Bar.

Kashiwagi has black hair and a tall build. Kashiwagi's hairstyle was initially a slicked-back one in Yakuza 0, later changed into a longer side part hairstyle from Yakuza/Yakuza Kiwami onward. He has a noticeably large scar across his nose and left cheek. In Yakuza: Like A Dragon, his hair is slicked-back again, though it has become gray and white in areas with age and he now possesses a small landing strip goatee. With how strong he is, it can be assumed that he is extremely muscular. His tattoo is never shown, and he never is shown shirtless.

Kashiwagi usually wears a gray double-breasted suit over a white dress shirt, cool gray necktie, and a pair of black dress shoes. In Yakuza 0, he wears a teal double-breasted suit with brown shoes, a white shirt, and purple necktie. In Yakuza 3, he wears a pinstripe indigo suit with a much lighter purple tie, and black dress shoes. When working as the bartender at Survive Bar, he wears a satin gray dress shirt, dark red regimental patterned necktie with blue and white stripes, a medium gray vest with a tattersall pattern, matching suit pants, and tortoise shell frame glasses. During funerals or other formal events, Kashiwagi is usually seen wearing a double-breasted black suit and black oxfords with a white dress shirt and a black necktie.

Kashiwagi is a stern but responsible man who likes to violently discipline his subordinates for any foolish mistakes they make. Regardless, he is resourceful whenever the situation calls for it and as a result, his subordinates greatly respect him, and he has a mutual bond of trust and respect with Kazama. He is something of an older brother figure to Kazuma Kiryu and Akira Nishikiyama, the adoptive children of Kazama, despite them being in the Dojima Family and not the Kazama Family directly. In his younger days, Kashiwagi was noted to have some hot-bloodedness within him, as seen with him getting excited at the prospect of fighting Goro Majima, who he seemed to hold respect for due to his reputation in the Shimano Family.

He also prefers working behind the scenes as a second-in-command rather than a full leadership position. Later in the series, Kashiwagi shows his softer side by helping ex-yakuza reintegrate into society by founding the HLA.

As the Kazama Family captain, Kashiwagi is the right-hand man of Shintaro Kazama and a superior to Kazuma Kiryu and Akira Nishikiyama. During Kazama's incarceration, he became the de facto leader of the family.

As Kiryu is framed for the murder of a man on the Empty Lot, he and Nishikiyama come to Kashiwagi for advice and support. He guesses that, as Kiryu returns from the Dojima Family headquarters, Daisaku Kuze approached him and asked him to sell out Kazama, which Kiryu confirms. He concludes that someone framed Kiryu for the murder, then asks him to tell him all that Kuze told him and in turn tells Kiryu and Nishikiyama what he knows about Kamurocho's redevelopment project. He is violently opposed to Kiryu confronting Sohei Dojima to terminate his oath, even going far as to punch him into a bookshelf.

Later, as Goro Majima enters the Kazama Family office in search of Nishikiyama, Kashiwagi stops him from interrogating his rookie. After he refuses to give up both Nishikiyama and Kiryu, he takes Majima to the roof of Kamuro Castle to fight him. He remarks on having wanted to face Majima one-on-one. Ultimately Kashiwagi loses, as Majima comments on prowess by remarking the Kazama Family to be breeding 'monsters like this'. He threatens to cut out Kashiwagi's eye in order to get the rookie to spill Nishikiyama's location.

He provides back-up for Kiryu and Nishiki in their raid on Keiji Shibusawa's Shibusawa Family, by having him and the Kazama Family arrive to the scene to help them fight off Shibusawa's men at the Nikkyo Consortium's ship.

As of 1995, Kashiwagi still holds his position as the Kazama Family's captain. He is present when Kiryu delivers his last debt collection before going to prison.

In 1996, he delivers the news to Nishikiyama that he will be awarded leadership of his own family as a place for Kiryu to return to, as the Kazama family could not take in Sohei Dojima's supposed killer. He later laments the fact that it was not Kiryu who filled this seat, triggered by Nishikiyama's negligence in letting his subordinate rob from stores in Kashiwagi's turf, which Kashiwagi viewed as a heartless act of ingratitude. He overlooks the incident and warns Nishikiyama to be more careful.

When Kiryu, Haruka Sawamura, Kazama, and Kazama's ally Yukio Terada are attacked by Futoshi Shimano and his men at the Shibaura Wharf, Kashiwagi arrives with Kazama Family to help. However, the battle ends with the death of Shimano and Kazama. In the end, Kashiwagi becomes the second Patriarch of the Kazama family.

In the wake of the Tojo Clan civil war, Kashiwagi takes over the chairmanship of the Kazama Family following Shintaro Kazama's death. A clan meeting is held by Yukio Terada to decide the Tojo Clan captain by seeing whose family generated the most profits. The Kazama Family is beaten by the Uematsu and Ibuchi families, but a last-minute contribution by the Majima Family makes Majima eligible for the role, causing the meeting to be called off.

When Akinobu Uematsu is murdered, Kashiwagi defends Majima in the following meeting and directs him to the Florist of Sai for any leads on the true killer. Following the death of Kei Ibuchi and the Majima Family's withdrawal from the Tojo Clan, Kashiwagi is made Acting Captain, but is pushed aside due to Terada's cronyism.

Following Terada's apparent murder at the hand of the Omi Alliance, he serves the Tojo under its interim chairwoman Yayoi Dojima, and seeks to avoid war with the Omi. Later, he and other Tojo Clan members are held hostage by Koji Shindo, who sold out to the Sengoku Family, to lure out Kiryu. The 300 men he gathers in the Kamurocho area support Daigo Dojima in his fight against the Go-Ryu Clan.

He continues to be under Daigo when he becomes Tojo Clan's Sixth Chairman.

Continuing as captain of the Tojo Clan, Kashiwagi takes over as interim chairman when Daigo is shot. He calls Kiryu, then in Okinawa, to inform him of that incident and later meets him in the Millennium Tower's Kazama Family office in Kamurocho.

He tells Kiryu about his meeting with the other Tojo executives, Yoshitaka Mine, Tsuyoshi Kanda, Goh Hamazaki, and Majima. Kashiwagi and Mine agreed to ask Kiryu to come back to the Tojo Clan and take over as acting chairman, which was opposed by Kanda and Hamazaki while Majima chose to abstain. Further, he reveals to them that the man who supposedly shot Daigo resembled the late Shintaro Kazama, but that he doesn't know any more than that of his identity.

He warns Kiryu to, out of the Tojo executives, keeps an eye on Kanda in particular, and shares his expectation that each organization will try to make their own move. As Kiryu shows him the picture of the man who shot Shigeru Nakahara, he confirms that it is the same man who shot Daigo but questions how he could have come from Okinawa to Tokyo in the allotted time between the two incidents. He also explains that Daigo was possibly shot because of his involvement in the Okinawa resort deal, and concludes that it was likely over his unwillingness to give up the deed to Morning Glory Orphanage's land specifically. He tells Kiryu that he placed Daigo in a trustworthy hospital without having told anyone where and decides to keep it secret to Kiryu as well.

As he does, the office experiences a blackout. A CIA helicopter arrives in front of the window and fires a gattling gun at Kashiwagi and Kiryu inside. While Kiryu is unharmed, Kashiwagi is gravely injured. His last words to Kiryu are asking him to find the man who is working with the Kazama-look-alike, suspecting he would be the one to try and take control of the resort deal and a traitor within the Tojo Clan.

It is later revealed that Kashiwagi was the founder of the Honest Living Association, which was used to help out and rehabilitate yakuza members who wanted out of the life or were not cut out for yakuza work. Their headquarters is an abandoned restaurant called Kamuro Castle and is represented by Ibuki, an ex-soldier of the Dojima Family.

Kashiwagi is revealed to have survived the shooting of the armed chopper, but was left in a coma. He then moved to Isezaki Ijincho, Yokohama where he opened a bar now known as Survive Bar. He chose that name as a reminder of having survived that experience. It is unknown if the Tojo Clan or any other yakuza organization is aware of his current status or whereabouts.

He becomes something of a staunch ally and friend to Ichiban Kasuga and his party, providing them a safe haven where they can relax and hang out. He occasionally overhears the party members' troubles and offers advice or assistance. At some point, he misplaces an earring on the second floor, which causes trouble for Kasuga as the multiple women that fell for him thought he cheated on them. He contacts all of them to clear up the misunderstanding after Kasuga reveals the earring got him in trouble.

In spite all of this, his identity is presumably never revealed to the group, only being referred to as "The Bartender". While running his bar he became proficient in cooking and making both bouquets and Chinese medicine, as he can help Kasuga craft said items at the bar.

The only time that Kashiwagi ever shows his combat prowess is during the fight with Majima in Yakuza 0. As stated below he has knowledge of the Oi-Zuki (though his sheer strength has augmented the technique to send a grown man flying back at least 10 feet). This knowledge implies he has training in either Karate, Jujitsu, or both. He has at least one combo, rush attack, counterattack, etc., all of which do their fair share of damage. He may combo a knee strike into a side kick and a Morote-Zuki. He will also often utilize a karate hammer fist, a jab, hook, uppercut combo, an Oi-Zuki, a right spinning back kick, and a cross, spinning backhand, spinning backhand combo. When one bar of Kashiwagi's health remains, a QTE will trigger. Press the correct button within in a (very) brief period to dodge his punch. Success will result in Majima barely avoiding the attack while gaining Heat, along with Kashiwagi praising the dodge. Failure will result in losing a chunk of health to the Oi-Zuki. It is evident that Kashiwagi is an extremely powerful opponent, as Majima calls him a monster and is visibly tired from the fight. When informed that Majima beat Kashiwagi by Nishikiyama, Kiryu is surprised to hear that Majima wasn't killed from the fight. During his poundmates summon in Yakuza: Like a Dragon, Kashiwagi wields a pump action shotgun. 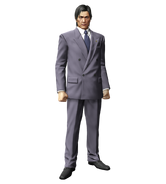 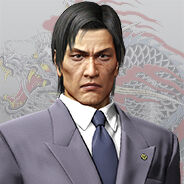 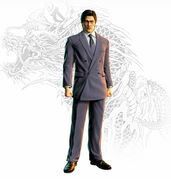 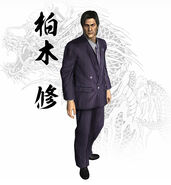 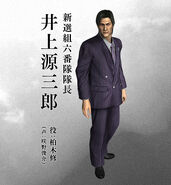