Rachael Leigh Cook
Reina (麗奈) is a supporting character in Yakuza 0 and Yakuza/Yakuza Kiwami. She is the proprietor of Serena, a bar on Tenkaichi Street in Kamurocho.

In Yakuza 0, Reina wears her hair down, while in Yakuza/Yakuza Kiwami she wears it in a bun. She also has a mole on her cheek, below her left eye. A passer-by in Yakuza Kiwami describes her as being a classical beauty.[citation needed]

In Yakuza 0, Reina wears her hair down and a red blazer over a purple dress, while in Yakuza/Yakuza Kiwami she is most commonly seen wearing a white blouse and dark pants. She is also briefly seen wearing a pink kimono with a white floral pattern. In all of her appearances, she wears a necklace and earrings.

Reina is a kind and caring woman that considers Nishikiyama, Kiryu and Yumi as friends.

Reina became the owner of the Serena bar sometime before 1988. Kazuma Kiryu and Akira Nishikiyama became her regulars in the months before December 1988; the pair only became old enough to drink in Japan in June and October 1988 respectively.

Reina is the proprietress of Serena and is an acquaintance of Kiryu and Nishikiyama. She lends her assistance to them both after Kiryu is framed for the murder in the empty lot and the events that follow. When Goro Majima fights Nishikiyama in Serena, she helps Nishikyama. At one point, she tries to hit Majima with a bottle. With Majima being the chivalrous type, he does not retaliate against her, but simply says "nice shot!". She also tosses a healing item to Nishikiyama.

Reina continued to run Serena in the years since the empty lot incident and Kiryu and Nishikyama continued to be regular patrons at the bar. In 1990, the pair's friend from when they were growing up in Sunflower Orphanage, Yumi Sawamura, also became a regular with them.

Following the events surrounding the murder of Sohei Dojima, Reina stops opening Serena to the general public, only allowing those she considered regulars through its doors. During the years Kiryu is in prison, she continues to hold a flame for Nishikiyama even as his ambition and desire corrupted him.

After Kiryu's parole, he visits Reina at Serena, who surprises him by saying that Yumi's younger sister Mizuki had come to Kamurocho and for a time worked at the bar, and then dropped off of the map after opening her own bar called Ares. While Reina does not know where Ares is located, she directs Kiryu to another bar called Bacchus, where someone with knowledge of its location could help. Reina also helps Kiryu by letting him use Serena as a hideout and she takes care of Haruka whenever Kiryu has to go somewhere.

It is eventually revealed in Chapter 9 that Reina had secretly been working with Nishikiyama by feeding him information on Kiryu's actions and whereabouts. When she attempts to take Nishikiyama's life, she is rescued by Shinji Tanaka, an ally of Kiryu's within the Nishikiyama family. Though Shinji tries to help her escape, Reina is ultimately killed by the Nishikiyama Family assassin Kazuto Arase, who also kills Shinji shortly thereafter. 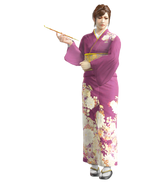 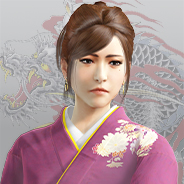 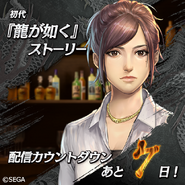 Add a photo to this gallery
Retrieved from "https://yakuza.fandom.com/wiki/Reina?oldid=77748"
Community content is available under CC-BY-SA unless otherwise noted.