Ryo Takashima (高島 遼, Takashima Ryō) is the Chief Director of Omi Alliance and a patriarch of his own family within the Omi Alliance.

According to an informant account, Takashima graduated from Touto University and has a good connection to the government.

Takashima served as a member of the Omi Alliance Headquarters Administration under Yukio Terada and eventually took over Terada's position as Chief of HQ once his former boss defected to the Tojo Clan.

When Kazuma Kiryu and Daigo Dojima travel to Osaka to broker a peace agreement between the Tojo and the Omi, Takashima is amongst the patriarchs attending the meeting between Kiryu and Omi Chairman, Jin Goda. He is supportive of Goda's desire to strike an alliance between the two organizations and attempts to hold back Torano Sengoku when he brashly opposes the notion and taunts Dojima. When the Chairman's son, Ryuji, bursts into the meeting and stages a coup against his own father, Takashima is amongst the patriarchs taken hostage by Ryuji's men.

Later on, after Kiryu and Daigo put a stop to Ryuji's coup, Takashima puts a contract out on Kauzuma and his new ally; Detective Kaoru Sayama, hiring an assassin to wound them but not kill them, so as to drive them out of Osaka without immediately putting the Tojo on the warpath.

Throughout the remainder of the story, Takashima operates mostly behind the scenes. Unlike Ryuji and Sengoku, he does not make any direct attempts to invade Tokyo with his men. Instead, in the finale it's revealed that his plot for conquest was one which involved making none of his men take part in the Omi-Tojo war. For years, Takashima had been aware of his former boss, Terada's, true identity as Daejin Kim, leader of the Jingweon Mafia in Japan, and had been working with him to execute his plot to destroy the Tojo and the Omi by pitting them against each other. However, Takashima did not intend to follow through on Terada's quest for vengeance all the way. Once the Jingweon, Tojo and Omi's war left both organizations weakened and most of their leaders dead, Takashima plotted to betray his boss and assume control of all three criminal syndicates so he could use their combined might to rule the Asian underworld.

Terada and Takashima's machinations culminated with Kiryu and Ryuji fighting each other atop the Kamurocho Hills construction site - a fight in which Goda was defeated and seemingly killed. Afterwards, Terada revealed his identity to a severely injured Kiryu and tried to murder him with the help of his Jingweon assassins, only to be bested as well. Only after his boss was beaten did Takashima reveal himself as Terada's accomplice; shooting Kiryu and murdering both Jin Goda and a shocked Terada.

Nonetheless, Takashima's scheme was foiled when Ryuji, who turned out to still be alive, picked up Terada's gun and shot Takashima repeatedly, brutally executing him.

He wears a black suit over gray turtleneck and a pair of glasses. In Kiwami 2, he's modeled after his voice actor, Hakuryu. 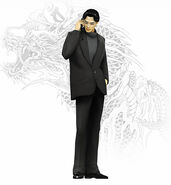 Takashima comparison with his seiyuu/voice actor.

Retrieved from "https://yakuza.fandom.com/wiki/Ryo_Takashima?oldid=75528"
Community content is available under CC-BY-SA unless otherwise noted.