Ryu ga Gotoku Online (龍が如く ONLINE, lit. "Like A Dragon ONLINE"), also known as Yakuza Online, is a free-to-play collectible card game spin-off of the Yakuza series. It was released in Japan for Android, iOS, and PC on November 21, 2018.

The game follows a new series protagonist Ichiban Kasuga. Kazuma Kiryu returns as the protagonist of a separate side story retelling the events of Yakuza/Yakuza Kiwami.

Title screen.
Add a photo to this gallery 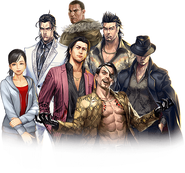 The hostesses.
Add a photo to this gallery

Retrieved from "https://yakuza.fandom.com/wiki/Ryu_ga_Gotoku_Online?oldid=77443"
Community content is available under CC-BY-SA unless otherwise noted.