Edit
watch 02:56
Raise a Floppa - The Loop
Do you like this video?
Play Sound
MAJIMA CONSTRUCTION IS AT WORK! This article is a stub and is under construction.

Director of the Genda Law Office

Akira NakaoWP
Ryuzo Genda (源田 龍造, Genda Ryūzō) is a supporting character in Judgment and Lost Judgment who also serves as each game's narrator. He is the director of the Genda Law Office.

Genda has a stocky build, graying hair due to his age, and wears an olive green vest over a standard white shirt/black slacks. He also wears a pair of black leather sandals and a pair of white socks.

Genda, along with Patriarch Matsugane, raised Yagami as a young boy following his father's death, overseeing Yagami's growth and career as a lawyer. Even after Yagami quit the legal business after the second trial of Shinpei Okubo, he still took care of him.

Genda helps Yagami by giving him work every now and then.

Genda watches Keiko Hamada while Yagami and Kaito get her money back from a crooked bar. When they return, Genda informs them of the commotion caused in Akihiro Ehara's trial.

As the lawyers and detectives progress further in their investigation, Genda offers his opinions and helps direct them to possible leads, with a confession from Yui Mamiya confirming many of their suspicions.

While Saori goes undercover in Queen Rouge to get a bonus for performing well, Genda and Hoshino appear as customers and order expensive drinks to increase her sales. During the session, Hoshino causes some of the hostesses to get suspicious, but Genda helps Saori restore the mood. When they return to the office, Genda and Hoshino throw accusations at the other of whose idea it was to be Saori's customers.

Genda is present for Ehara's appeal in 2022. He later reads an article of Hidemi Bando's arrest and is surprised to learn that Sadao Takano had praised the detectives of Yagami Detective Agency and Yokohama 99.

Full-body render of Genda in Judgment 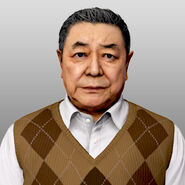 Genda as he appears in the opening credits