Manager of a hostess bar

Elizabeth Maxwell
Saeko Mukoda (向田 紗栄子, Mukōda Saeko) is one of the seven playable characters appeared in Yakuza: Like a Dragon. She is the manager of a hostess bar owned by Isao Nonomiya.

Saeko's chin-length hair is naturally curly, and though she straightens it out, some stands are still left curled.[2]

Saeko is a shrewd and intelligent woman with a knack for business, running a bar for her boss, Isao Nonomiya. She is quite blunt, and frequently teases her fellow party members. As she warms up to everyone, Saeko falls into a younger sister role within the group, though she is the most responsible, and will oftentimes scold their immaturity as a result. Saeko demonstrates her cunning in battle, utilizing her charm to leave enemies open for a brutal follow-up attack.

Despite running away from her family, she loves and cares deeply for her twin sister Nanoha. She keeps watch over Nanoha from afar, and intervenes when she believes that her sister's boyfriend is taking advantage of her for monetary gain.

Saeko was very controlling of her sister Nanoha Mukoda when they were children, due to a parental instinct resulting from their mother being ill. In high school, she took up part-time work due to her father not making enough money, which is where she learned of how much money nightlife workers earn. She would end up out-earning her father Tatsuro Mukoda, resulting in him becoming compliant towards her.

Though Saeko wanted an honest life for Nanoha, her controlling attitude left Nanoha unwilling to listen, and when Saeko asked her if her new boyfriend Katsuragawa was showing any signs of danger, she finally snapped as Katsuragawa exhibited many of those signs and Saeko asked her to break up with him.

After a heated argument, Tatsuro and Nanoha started distancing themselves from her. Around 2011-2012, after the fight, Saeko left home to focus on work, not having met with Nanoha since. She began work as a hostess in a bar owned by Isao Nonomiya, eventually working her way to be mama of the place after becoming its best hostess. Saeko taught her staff how to operate the bar in her absence, and would have them secretly check in on her family.

Nonomiya calls Saeko, informing her of his newest helpers Ichiban Kasuga, Yu Nanba, and Koichi Adachi. She is informed from him that Nanoha had been working under him for funding their father Tatsuro's stay at Sunlight Castle. He asks if she has enough money to pay for his treatment, which she does not, when their conversation is interrupted by men entering Otohime Land while shouting repeating the name "Lao Ma". Before hanging up, he asks her to seek the trio.

Nonomiya dies, allegedly form hanging himself. The police question her of Nonomiya afterward, and she tells them what she knows, but they drop the investigation when she tells them of "Lao Ma". Kasuga, Nanba, and Adachi make their first encounter with Saeko just outside Isezaki Ijincho's funeral home after Nonomiya's funeral. She introduces herself as Nanoha's twin sister. Saeko tells the team of her encounter with the police she breaks down asking for the trio's help in getting justice for Nonomiya. They accept her into the party.

The team then make their way to Chinatown, getting assaulted for trying to find Mabuchi in the Yokohama Liumang. They eventually head to a Chinese members-only hostess club, where Saeko offers herself to work at the club to help the team; she manages to get hired at the club as a VIP hostess, enabling the team to gain access and talk to Zheng. They learn that the Yokohama Trading Company can be their ticket to meeting Mabuchi, and Kasuga invites her back to their place when they finish.

Saeko and the team manage to find employment at the Yokohama Trading Company thanks to Shuichi Kanbe, where Saeko is employed as an accountant. Saeko discovers that the commodities are sold at break-even point, which makes her suspicious about the company's account book. They try to obtain proof of counterfeiting, but are captured by Mabuchi. After being freed by an incognito Joon-gi Han, they try to stop a war between the Liumang and the Seiryu Clan, but are tasked with finding the Geomijul for proof of Mabuchi's guilt.

At the Geomijul, Saeko finds herself enamored by Han, and they all learn of the Geomijul's own counterfeiting scheme, then Seong-hui exposes Nanba's true motives of getting close to the Geomijul. To save their comrade, they all occupy the Geomijul members while Nanba escapes. Soon after, the truth behind the counterfeiting scheme is revealed to them and that Nanba is being marked for assassination. Suspecting he took refuge with Bleach Japan, they head there to learn he has allied himself with them, and that Ryo Aoki is Masato Arakawa.

Saeko searches the internet for any evidence Aoki is Masato, but cannot find any, though the theory is not ruled out fully. They are asked to defend the Geomijul, which they reach through a secret passage, and Saeko convinces Kasuga and Adachi to help, and Seong-hui had bowed to them. Afterward, an interrogation of Hajime Ogasawara confirms Aoki is Masato, and they are joined by Han in rescuing Tianyou Zhao, where Saeko expresses her happiness at seeing Nanba rejoin them, and welcomes him back.

When Aoki is revealed to be in Ijincho, Saeko suggests they intercept him by going on an underground parking lot where he may have parked his car. Later, Saeko joins Kasuga in entering a Bleach Japan building to find Kume, but they see it is empty and she notes Tokyo Omi Alliance members gathering outside. Kasuga start to become too violent, prompting an intervention from Kazuma Kiryu. Kiryu fights Kasuga and his party to calm him down, and knocks him out. Saeko wakes him up afterwards.

After Kasuga baits Aoki to the Millennium Tower, Saeko waits alongside Han for Aoki to order his political enemies killed. They reveal themselves after Aoki's order is recorded and uploaded by Han. Following the confrontation, Saeko joins Kasuga and Nanba at the funeral for Masumi and Masato Arakawa, where ex-Tojo and Omi officers also wait. Saeko is worried Kasuga will join them in Sotenbori, but is relieved to hear he will be staying. Outside, Kasuga asks Saeko to relay his words to the others who are curious to know of Kasuga's decision.

Saeko employs Boxercise, a high-intensity training regimen based on boxing. 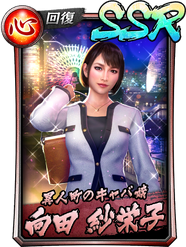 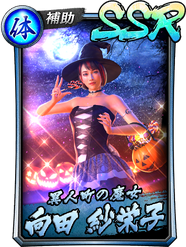 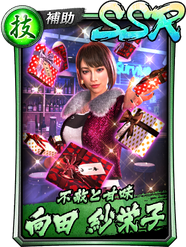