Saito (斉藤, Saitō) is a character in Yakuza 4. He is the leading guard at Okinawa Penitentiary No. 2.

He has a violent and ruthless nature and is known to have killed prisoners during punishment beatings. It is implied that he introduces new inmates to the prison, as is shown when he first meets Taiga Saejima. Later, he is seen beating Saejima viciously as punishment. He then fights Saejima again as the latter makes it out of his cell. Some time after, he, along with several other guards, catches up with Saejima just before Saejima could follow Goh Hamazaki out of prison. In spite of his initial defeat, he is able to gain on Hamazaki and Saejima as they were about to make for the mainland. A frantic struggle ensues where by he shoots Hamazaki a few times before he is pushed off into the sea.

A few days following that, he reappears with his fellow guards at Tetsuo Tamashiro's old office in Okinawa, attempting to kidnap Yasuko Saejima. However, he is defeated again, this time by Kazuma Kiryu.

His ultimate fate from this point onward is unknown, although it is highly unlikely that he died.

He fights with a baton that could easily break guard as well as attack with no flinch properties like Saejima. He does not have any Heat modes or Heat actions(The exception for Heat actions with QTE). He can do some sort of tackle if you are far from him. 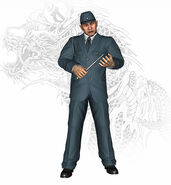 Add a photo to this gallery
Retrieved from "https://yakuza.fandom.com/wiki/Saito?oldid=75670"
Community content is available under CC-BY-SA unless otherwise noted.