Saki's Mother, unnamed in-game, is a character in Yakuza 3. She is Saki's biological mother.

Saki's mother appears to be an extremely self-centred individual, who has no interest in raising her daughter. Instead, she prefers to spend her time pursuing a promiscuous lifestyle.

Saki's mother had an extremely fractious relationship with her late husband, preferring to spend her nights at other men's houses whilst he spent large sums of money on gambling. She had no interest in taking care of Saki, not even after the death of her father. She was happy to let Shigeru Nakahara be her father instead.

This state of affairs changed during Chapter 3 of Yakuza 3, when her current boyfriend Tetsuo Tamashiro suggests that she take Saki back. When Kiryu finds the pair with Saki in his office, Tamashiro reveals that he never had an interest in Saki's mother. He only wanted to kidnap Saki to lure out the Ryudo Family to his turf. Once again showing complete disregard for her daughter, Saki's mother is outraged that Tamashiro deceived her like this. 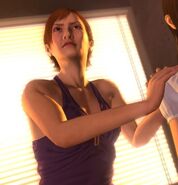 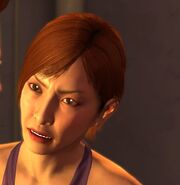 Retrieved from "https://yakuza.fandom.com/wiki/Saki%27s_Mother?oldid=72282"
Community content is available under CC-BY-SA unless otherwise noted.