Member of Community Safety Division of the Tokyo Metropolitan Police

Tokyo Metropolitan Police
A member of the community safety division in Yakuza 4, who is kind towards Tanimura.

He is sent by Munakata to "dispose of" Sugiuchi and Tanimura, but spares Tanimura. After writing a false report to Munakata, lying about having killed both men, and holding Tanimura's adoptive family hostage at their restaurant, he commits suicide.

He wears patrol officer's outfit and a pair of glasses. He has graying hair due to his old age. 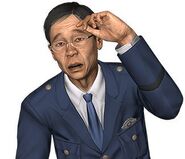 Add a photo to this gallery
Retrieved from "https://yakuza.fandom.com/wiki/Satoshi_Hisai?oldid=70983"
Community content is available under CC-BY-SA unless otherwise noted.