Shigeru Nakahara (名嘉原 茂, Nakahara Shigeru) is a supporting character in Yakuza 3. He is the patriarch of the Ryudo Family and owns the land on which Morning Glory Orphanage is built.

Nakahara is a thoughtful and caring person, evident when he reluctantly sent an eviction notice to Kiryu because of his concerns about Okinawa's economy and when he adopts Saki away from her abusive parents. He is also a well-respected man among the local community, a rare accolade for a yakuza. Like Kiryu, Nakahara is very family-orientated, both men being able to summon superhuman strength if it means protecting the ones they love.

Nakahara appears to be well past middle age, and has a somewhat heavy build. He wears a white tank top, a pair of slacks and a pair of sandals. He has a tattoo of shisa on his back.

Nakahara's Ryudo Family was owed a debt by an unnamed gambling addict, who was the biological father of a girl called Saki. When Nakahara and Rikiya Shimabukuro went to collect on the debt, they found that the man had committed suicide by hanging, with Saki clutching her dead father's leg. Knowing that Saki's mother did not care about her, Nakahara reluctantly took her in.

In Yakuza 3, Nakahara is Kiryu's landlord. He owns the land that Sunshine Orphanage is on. At one point, he threatened to evict Kiryu from the orphanage, much to the kids' shock. They urge Kiryu to have a word with him. It turned out that Nakahara was concerned about Okinawa's economy and thought that evicting them to sell the land for the new resort may help him financially.

After destroying the orphanage, Tetsuo Tamashiro lures Nakahara, Kiryu, and Rikiya to a bullfighting ring, where he sets two large bulls on Nakahara. One bull is about to rush him from behind, when the previously mute Saki finds her voice to scream out a warning to him.

In Premium Adventure mode, Kiryu can talk to Nakahara to start a New Game+[2] without substory/minigame completion. 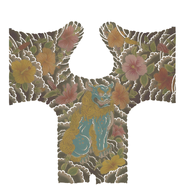 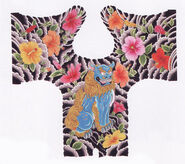 Nakahara wrestles with a bull.
Add a photo to this gallery

Retrieved from "https://yakuza.fandom.com/wiki/Shigeru_Nakahara?oldid=77620"
Community content is available under CC-BY-SA unless otherwise noted.