Dave B. MitchellWP
Shiro Senda (千田 四郎, Senda Shirō) is a character featured in the Lost Judgment add-on, The Kaito Files. He is a former member of the Tojo Clan's Bato Family, now working as a corrupt detective for the Bato Detective Agency.

Senda is determined to do what it takes to please his boss and fulfill his promises. However, he is awkward and often cracks under pressure such as when Kaito began to question him about Mikiko's whereabouts. He also seems to have low self confidence, evidenced when he is unsure whether he and Igarashi can defeat a group of goons without Kaito. He is hot-headed and childish, getting into pointless arguments with Jun.

Senda was a member of the Bato Family until the Tojo Clan dissolved in 2019.

One of the Bato Detective Agency's prior clients was made to hand over a large sum of money, which lead to her hiring the Yagami Detective Agency. Saori Shirosaki had asked Senda and the Bato Detective Agency to investigate her boyfriend Issei Hoshino of infidelity. Senda was able to obtain a picture of Hoshino leaving a love hotel with an unfamiliar woman (who was in reality a disguised Saori), and invited Hoshino for a chat.

Senda blackmails Hoshino into paying a large amount of money to delete the image of him leaving a hotel lest he send it to Saori. Masaharu Kaito confronts Senda and reveals he asked Hoshino and Saori to play an act in order to get evidence of the Bato's extortion business, and Hoshino had recorded Senda's blackmail. Senda tries to take the recorder and escape, but Kaito catches him and has Senda bring him to the Bato office, where he retrieves a client's extorted money.

To work toward their goal of taking Jun Sadamoto, Senda and his goons fight Kaito, allowing Masao Igarashi to take Jun with him. They take Jun to their new offices for safekeeping. Kaito is able to break into the building and rescue Jun. In an attempt to stop Kaito, Senda calls in Fudo Oshikiri, who fails. Senda and his goons aim guns at Kaito and Jun, and Jun escapes through a window. Senda cannot shoot, as they need Jun alive, allowing both Jun and Kaito to escape.

Mikiko Sadamoto reveals herself to be an anonymous client who requested Bato services, and has Senda accompany her to tail Shusuke Kenmochi. However, Kenmochi was aware Mikiko would be after him, and has his underlings beat up Senda and take Mikiko. Kaito arrives, and Senda warns him of the immediate threat before being allowed to leave.

Afterwards, Senda and Igarashi take Mikiko back to their old office, but Mikiko escapes when given a room to rest in. Kaito is insistent on saving her, and, after Senda and Igarashi fight him, allow him to go to Ijincho with them, to a hotel where Mikiko is going to be. Senda drives the car while Igarashi fills Kaito in on Mikiko's past. At the hotel, Senda watches for Mikiko until Kaito engages with Crimson Lotus. He and Igarashi help Kaito, and stay behind when he reaches a guest elevator to fend off Crimson Lotus.

It is assumed that Senda and Igarashi return to Kamurocho after the incident's resolution. 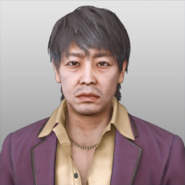