Patriarch of the Dojima Family

Sohei Dojima (堂島 宗兵, Dōjima Sōhei) is a character first introduced in the first game as a minor character, and later serving as the main antagonist in Yakuza 0. He is the patriarch of the Dojima Family.

Sohei Dojima is of average height (in 0 he is shown to be shorter than Kuze, Awano, and Shibusawa), with a modest build. His black/grey hair is cut very short. In 0, he is either depicted wearing a tan colored kimono or a suit. In the original Yakuza, he is only shown when Kiryu arrives to find him dead, where he is wearing a white suit with a red dress shirt and tie. In the flashback during Yakuza 2, he is shown to be much younger, having a slightly larger build, his hair darker and a little longer, and he is sporting a slight beard. Throughout his appearances, he wears a pair of aviator sunglasses at all times, even indoors.

Dojima is first mentioned in Yakuza 1 by Nishiki who, when Kiryu says that his application for his own family hadn't been accepted by Patriarch Dojima, sarcastically tells him that there's no way he would object because Kazama had his weight behind it, due to Kazama being the only one keeping the Dojima family afloat. Nishiki then continues that all Dojima does is "..somethin' else these days. All he does is yak about the glory days". A little further on in the story, it is said that Dojima was morally corrupt, having a violent temper, cheating on his wife frequently, as it was said that he had a mistress on every corner, and was overall unpleasant. During the flashback in Yakuza 2, when discussing the extermination of the Jingweon, he is understanding of Kazama's objections to the attack and considers his proposal to instead drive them out. But he also concurs with Shimano, deciding that they had gone too far, saying "Kazama, I hear where you're coming from". (Shimano yells in a shocked tone "Boss!") "Cool it a minute. Still...these Jingweon guys are different. Their methods are inhuman. If we let this keep up, the Dojima Family's gonna be in danger."

Sohei rose to power during the rise of the Tojo clan, as a skilled businessman and criminal he has successfully controlled most of Kamurocho through his three enforcers. In 1980, due to the string of Dojima Family yakuza members being killed by the Jingweon Mafia, he ordered his two lieutenants, Shintaro Kazama and Futoshi Shimano, to eliminate all members of the mainland mafia, leading to the infamous Jingweon massacre, to which only three people survived and made the Dojima Family a major force within the Tojo Clan. At some point, Dojima and Kazama attacked Elder Chen's mafia, the resulting actions had many women and children killed, and the mafia was confined into Little Asia. It was said that Sohei has had many affairs with other women, with his wife Yayoi knowing but still remaining faithful.

As one of the three powerhouses in the Tojo clan, Dojima had the most power in terms of manpower and influence, compared to Kazama's good relations with the Chairman and Shimano's secret alliance with Omi Alliance. When word broke out that there was a land ownership dispute involving the small plot of land that will be the site of the Millennium Tower, he instructs Kiryu to assassinate the target in which he refuses. Sending Daisaku Kuze, one of his trusted men to kill Kiryu, he fails before him and was forced to perform yubitsume in front of the boss. Angered, he send his men to Sotenbori to find the holder of the will but fails to thanks to the efforts of Kiryu and Majima. Ultimately, Makoto, the recipient of the will appears and offers him the land in exchange for the lives of the men who killed her brother where he states it was a mere formality to prevent anyone from leeching off his fortune. He shoots Makoto to show how expendable she is but ultimately fails to acquire the land as she had already entrusted it to Majima who gives it to Masaru Sera. In his first act as the upcoming chairman, he orders the surviving lieutenants to be taken to Anagura indefinitely for their actions as Dojima loses his hopes of being the next Chairman of the Tojo Clan.

Following the events of Yakuza 0, he's appointed as guardian to Masaru Sera, leaving the de facto control of Dojima Family to Shintaro Kazama, despite Kazama's opposition towards Dojima regarding the revitalization project. Nishiki notes that the family is extremely angry with Kiryu. Despite this, Kiryu ends up doing well within the Dojima ranks, with Yayoi Dojima believing Kiryu would one day lead the Dojima family.

Dojima's Family was widely respected with Kazama as his lieutenant and members like Kiryu and Nishiki to carry out his wishes. His wild, violent temper made him a fearsome leader and no one ever dared to challenge him. Dojima had his eye on Yumi and one night he took her away to his office against her will. As soon as the word got to Nishiki, he arrived in a fury and killed his patriarch without thinking. Nishiki and Yumi were reeling in shock as Kiryu burst in just ahead of the police. Kiryu had only seconds to make a life-altering decision and based on brotherhood and honor, so he took the rap for killing Dojima. 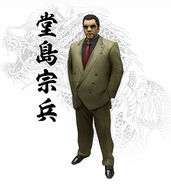 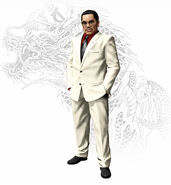 Icon for an unreleased card
Add a photo to this gallery
Retrieved from "https://yakuza.fandom.com/wiki/Sohei_Dojima?oldid=77666"
Community content is available under CC-BY-SA unless otherwise noted.