The Survive Bar is a karaoke and snack bar located in Isezaki Ijincho.

Osamu Kashiwagi opened the bar some time after recovering from his wounds received via helicopter attack in 2009. He named the bar "Survive" after surviving that encounter and gaining a newfound appreciation for life. He prefers to run the bar as a hobby than a business.

Feeling a bottle of high-end liquor would look good in his bar, he took an empty bottle of fabled whiskey known as Legend Malt and filled it with cheap liquor. On the rare occasion that someone requests it, Kashiwagi tells them a false story of a lost love the bottle was meant for, which dissuades the would-be customer from buying it and learning it is fake.

Iroha Yanagi works here and Koichi Adachi is one of the customer's few regulars. He introduces Ichiban Kasuga and Yu Nanba to the place and they use it as their primary gathering location. Eventually the later companions Saeko Mukoda, Eri Kamataki, Joon-gi Han, and Tianyou Zhao join in.

When Kasuga runs against Sota Kume in the elections, the bar's exterior is defaced by the latter's supporters.

As of 2021, Cold Noodles have been added to the menu after a customer witnessed the bartender eating some. 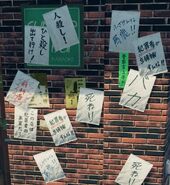 The bar exterior after Kasuga's campaign.