Tadashi Madarame (斑目 忠, Madarame Tadashi) is a character in Yakuza 5. He is the patriarch of the Yamagasa Family.

Madarame is a peaceful patriarch who cares immensely for his family members, who he sees as his own children. He considers himself an "old-school" yakuza who values etiquette and treats everyone with the respect of an equal.

Madarame seeks to make a deal with Daigo Dojima, understanding that his own Yamagasa Family pales in comparison to both the Tojo Clan and Omi Alliance. His meeting with Daigo is sabotaged by a traitor in the Tojo ranks, however, and Daigo arranges for them to meet in a car instead. He tells Madarame that he had suspected an assassination attempt, and that their lives are in danger, also telling him that he plans to go into hiding, aided by the confusion surrounding his sudden disappearance.

Madarame gives Kiryu a letter ordering the disbandment of his family, saying that they've gotten too big for Fukuoka, and he hopes that dissolving the family will keep them safe. 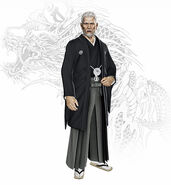 Add a photo to this gallery
Retrieved from "https://yakuza.fandom.com/wiki/Tadashi_Madarame?oldid=75550"
Community content is available under CC-BY-SA unless otherwise noted.