Takaaki Matsunaga (松永 隆明, Matsunaga Takaaki) is a supporting character in Yakuza 6. He is a member of the Hirose Family and the proprietor of Moreno.

He wears an all-yellow clothing. His shirt has a cat motif at the back. He has a yankee-like overall appearance, especially apparent with the pompadour hairstyle.

Despite Matsunaga's stern appearance, he goes through life at his own pace. Although a senior within the family, his occasional thoughtless, out-of-place remarks stun his underlings, Yuta Usami and Naoto Tagashira. 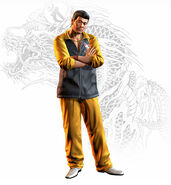 When Kiryu grabs an opponent while standing near Matsunaga and the player executes the Triangle button, the Matsunaga's Team Heat action will play. Kiryu brings the opponent up from behind, Matsunaga will then wind up his fist, run towards the opponent and clothesline them.