Member of the B-Kings (formerly)

Takashi (タカシ) is a recurring character in the Yakuza series first introduced in the original Yakuza. He is the son of The Florist of Sai and boyfriend of Kyoka.

Takashi's life was changed after meeting Kyoka, the daughter of a yakuza family patriarch called Atobe. Atobe is fiercely protective of his daughter, and resorts to extreme measures to prevent Kyoka from being with him.

After settling things between himself, his girlfriend, and Atobe, Takashi managed to steady his relationship with her, and the pair conceived a child. During this time, he also managed to find a steady job.

At the battling cage, Takashi protects his girlfriend Kyoka by attacking Kazuma Kiryu, thinking that he is a member of the Atobe Family. After being defeated, Takashi asks Kiryu to let him escape, but he is stopped by B-King and his gang, kidnapping Kyoka. Kiryu steps in, fighting the gang off, letting Takashi rescue her at the Kamuro Theater.

Takashi accidentally meets Kazuma Kiryu in Theater Square. He then greets him and thanks him for helping him out with the Atobe Family situation a year ago. Kiryu sees him with another girl, which makes Kiryu thinks that he is cheating. Kiryu feels disappointed with him, considering Takashi equal to an ordinary street punk, which Takashi disagrees, explaining about Kyoka's whereabouts.

Afterward, they head to Shellac where Takashi tells him that he worked in a number of places, but his colleagues always made fun of him. Kiryu asks again about his previous commitment to Kyoka, and Takashi reveals that Kyoka is seeing another man. Also, according to one of his colleagues at his last job, Kyoka went to a hotel with a man. Kiryu is disappointed that Takashi did not bother to verify the info. Takashi then switches the topic to a legendary information dealer in Kamurocho, which refers to The Florist of Sai. Kiryu heads to the Millennium Tower, where he tells The Florist that his son wants to see him, which The Florist agrees to on the condition that he meet him professionally.

Takashi has landed himself a decent job at a retail business and seems to be on good terms with Kyoka when Kiryu asks about it. This time, he wants to see the Florist again, which Kiryu agrees. In Purgatory, Takashi tells the Florist that he wants to find his estranged father. He also tells The Florist that Kyoka is pregnant, and that he wants to marry Kyoka for that reason, but Takashi does not have anyone from his own family to invite to the wedding. The Florist agrees to help, under the condition that Takashi has to do some work for him. 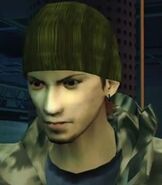 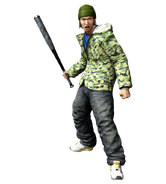 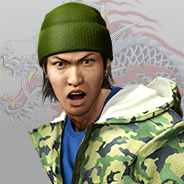 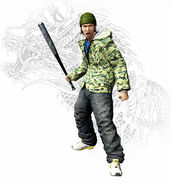 Add a photo to this gallery
Retrieved from "https://yakuza.fandom.com/wiki/Takashi?oldid=75557"
Community content is available under CC-BY-SA unless otherwise noted.