Patriarch of the Tamashiro Family

Tetsuo Tamashiro (玉城 鉄生, Tamashiro Tetsuo) is a character introduced in Yakuza 3. He is the patriarch of the Tamashiro Family, a yakuza family from Okinawa that is a distant branch of the Tojo Clan.

Tamashiro appears to be a ruthless person who often plays dirty by resorting to things like kidnapping and putting other's lives in danger. He also appears to be abusive and manipulative, evident when he seduces Saki's Mother to kidnap her daughter, only to reject her offer to become a family, nearly killing her instead.

He wears a red suit over black dress shirt, a chain necklace and a pair of wrap-around sunglasses. He also has an auburn hair and a medium build.

Tamashiro first appears in his office after Kiryu and Rikiya Shimabukuro come to rescue Saki from him and Saki's Mother. Kiryu then beats Tamashiro in a fight, dealing him a humiliating blow.

Tamashiro returns with his family in chapter 11 due to Yoshitaka Mine's support and begins to exact his revenge towards Kiryu and the Ryudo Family by demolishing Morning Glory Orphanage.[2] The Tamashiro family injures Mikio Aragaki and captures Ryudo Family patriarch Shigeru Nakahara.

Tamashiro puts Nakahara in a bull cage and plans to have him killed by the bulls until Kiryu and the others come to his rescue. Just when things get grim, Saki suddenly calls out for Nakahara for the first time, giving her foster father a strength to hold up against the attacking bulls while Kiryu fights off the remnants of Tamashiro family. Tamashiro then challenges Kiryu himself and is defeated.

Although Kiryu wins the battle, he does not realize that Tamashiro is still alive, who then gets up and tries to shoot Kiryu. However, Rikiya shields Kiryu from the gunfire and ends up getting shot himself. Tamashiro is about to fire another shot when Joji Kazama[3] arrives just in time to shoot Tamashiro in the head, killing him instantly.

In Yakuza 4, Tamashiro's vacant office is used as a meeting place by Kiryu, Goh Hamazaki, and Yasuko Saejima.

Tamashiro uses a good combination of dodges and rolls, and is a weapons specialist. In his first encounter, he wields a set of throwing knives and a pair of tekko, a type of fist-load weapon akin to brass knuckles native to Okinawa. In his second encounter he is armed with a handgun, which he wields with excellent proficiency. Occasionally, he will also use a combo of kicks. 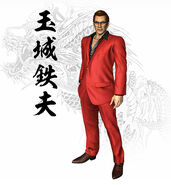 Retrieved from "https://yakuza.fandom.com/wiki/Tetsuo_Tamashiro?oldid=75857"
Community content is available under CC-BY-SA unless otherwise noted.