The Price of an F-Cup

The Price of an F-Cup is the 1st substory in Yakuza Kiwami.

While walking along Pink Street, Kiryu encounters a woman who is trying to escape from a drunk. After Kiryu threatens to fight the drunk man, he scurries off and angrily exclaims that Mai wasn't worth it. Mai then invites Kiryu out for a drink. If the second drink is continually refused, Kiryu says that the drink is obviously drugged, skipping to the ending fight of the substory. If Kiryu accepts the second drink with Mai, he ends up passed out in an alley.

If the drink was accepted, Kiryu can confront Mai again the next time he sees her. She tells Kiryu that she was set up and that he should revisit the bar to get his revenge. The barkeep and a group of men will try to attack Kiryu. Defeat them, and they give up 100,000 yen, as well as the location of a secret casino under Kyushu No. 1 Star along with the password of which ramen dish must be requested in order to be let in. 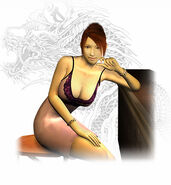 Retrieved from "https://yakuza.fandom.com/wiki/The_Price_of_an_F-Cup?oldid=75481"
Community content is available under CC-BY-SA unless otherwise noted.