Edit
watch 02:59
Metroid Dread - The Loop
Do you like this video?
Play Sound
MAJIMA CONSTRUCTION IS AT WORK! This article is a stub and is under construction.

Leader of the Yokohama Liumang

Robbie Daymond
Tianyou Zhao (趙 天佑, Zhào Tiānyòu/Chō Ten'yū) is a supporting character as well as one of the seven playable characters in Yakuza: Like a Dragon. He is the leader of the Yokohama Liumang.

A tall man with an athletic build, Zhao has a slicked back undercut hairstyle that is shaved on the sides. His hair is black and he has a small goatee and moustache.

Zhao's outfit consists of a leather jacket over a printed black and orange button down shirt, grey knee shorts over a pair of black tights, and high top black and white leather sneakers with gold pyramid studs and spikes on the tongue. He wears a pair of tinted round glasses, as well as a pair of gold hoop earrings, a thick gold bangle on his right arm, and a different ring on each finger. His nails are painted black.

During his time as leader of the Liumang, Zhao puts up a front of cold indifference, though during his Drink Link conversations with Ichiban, he reveals that he cares deeply for his men, especially Akira Mabuchi, whom he considers his friend and brother. He appears to be self-conscious of his "softness", though Ichiban repeatedly reassures him that it's a good trait to have. In his Drink Link, he reveals that he put up a facade as a ruthless and sadistic leader only to keep up appearances as the leader of the Liumang. This was because the leadership of the Liumang was forced onto him due to matters of inheritance from his father.

Zhao also enjoys cooking, and the party comments on how good his chili shrimp is in particular.

Zhao has a wisecracking sense of humor, and some party chats show that he loves pranking and teasing his fellow party members to the point of annoyance. Zhao also has a penchant for sadism on the battlefield as he enjoys toying with his enemies both psychologically and physically using tactics such as theatrical weaponry, death threats and insane battle cries.

Despite his uncaring and seemingly unhinged demeanor, Zhao is a thoughtful and caring man who struggled to find his place early on in his life. He cares a great deal about his own men and always sought to give them a home. He also cared deeply for Mabuchi and viewed him like a brother despite repeated betrayals from the latter. Since joining Ichiban's party, his heroic nature is further highlighted. Finally finding somewhere he can belong in, Zhao gladly tags along with Ichiban and company and has become more than ready to give his life for them and their shared cause despite the dangers they come across.

Zhao holds Mamoru Takabe at gunpoint after the latter leads the Seiryu Clan to his restaurant, demanding Ichiban Kasuga for answers. He believes Kasuga's testimony that Akira Mabuchi tried to instigate a war between the Ijin Three, but sends him to Geomijul for proof.

At Heian Tower, Seong-hui gives him the proof he desired and Kasuga, Koichi Adachi, and Saeko Mukoda arrive to learn about the money counterfeiting scheme Zhao and the Ijin Three are a part of.

Though he does not have a speaking role, Zhao can be seen cooking food for Yagami, Sugiura, Kuwana, and Tesso.

In battle, Zhao has an increased resistance against bleeding, fear, rage and silence. His default job called 'Gangster' has him wield a Chinese saber which he uses to great effect, mixing in theatrical techniques such as lighting the blade on fire with alcohol and burning opponents by sending waves of fire their way as seen with his Essence of The Phoenix Blade technique. His bare-handed attacks are based on a variety of acrobatic Chinese martial arts such as the renowned Drunken Fist. In his Essence of Deadly Beasts attack, he appears to utilize snake, tiger, dragon, and mantis style kung fu. He can also damage a whole crowd of enemies by gracefully swinging a ladder like a weapon with the Essence of Ladder Acrobatics. 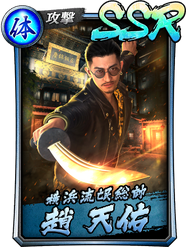