Tobe (戸部) is a minor recurring character in the Yakuza series first introduced in the original Yakuza. He is the proprietor of Bantam.

Tobe takes over Bacchus after the previous bar owner is gunned down, renaming it Bantam.

Tobe gathers a group of men who try to attack Kiryu for money, but this fails. Kiryu forgives Tobe and suggests that he try running the bar for at least a few more months, suggesting that trade may pick up as people start to forget about the mass shooting that had taken place there the previous year. Tobe refers to Kiryu by name after this whenever he comes in to order a drink.

Tobe still remembers Kiryu when he returns to Kamurocho in 2009. 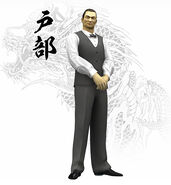 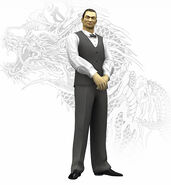 Add a photo to this gallery
Retrieved from "https://yakuza.fandom.com/wiki/Tobe?oldid=75567"
Community content is available under CC-BY-SA unless otherwise noted.