Lemme know if ya need incense money for Terada's funeral. I'd be happy to spot ya a billion or two.
— Sengoku to Kiryu, Yakuza Kiwami 2

Toranosuke Sengoku (千石 虎之介, Sengoku Toranosuke) is a flashy and brash lieutenant of the Omi Alliance. Head of the Sengoku Family, Sengoku is one of the Omi's "Four Kings".

Sengoku is a rude, smug, brash, and clearly boastful of his wealth and his financial contributions to the Omi Alliance, causing him to be not particularly liked among the higher-ups of the alliance. He is also willing to resort to measures like kidnapping a child to further his own ends.

He is arrogant and incredibly wealthy, owning a castle in Osaka which can split in two, revealing a second castle made of gold filled with samurai and ninjas. Also inside are two tigers, which he uses in attempt to kill Kiryu (in reference to his given name; the first character, "Tora", means "tiger").

He sends men into Kamurocho to destroy the Tojo Clan, but they are all defeated single-handedly by Goro Majima. He then kidnaps Haruka Sawamura to lure Kazuma Kiryu to him. After Kiryu defeats him, he is killed by Ryuji Goda who is disgusted that he put a child in danger for a shot at killing Kiryu. 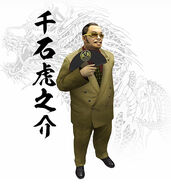 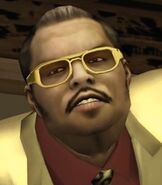 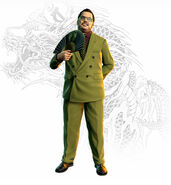 Add a photo to this gallery
Retrieved from "https://yakuza.fandom.com/wiki/Toranosuke_Sengoku?oldid=75569"
Community content is available under CC-BY-SA unless otherwise noted.