Amane is a character in Judgment.  She is a fortuneteller that hints about "calamities" happening in Kamurocho. She is one of the four women that Takayuki Yagami is able to date.

Amane first appears in the substory The Black Calamity, where she had previously given a man named Meguro a prophecy about "black calamity" approaching him. Yagami approaches both Amane and Meguro, to which Meguro would then flee due to believing Yagami's black jacket has something to do with his "calamity". Yagami follows Meguro until it is revealed that the calamity is a black beer that is being sold to Meguro for 100,000 yen. Yagami saves Meguro, though he runs away shortly after, again fearing the calamity.

Amane's substory continues into The Black and White Calamity, where she again warns Meguro, this time about a "black and white calamity". Meguro is infuriated at the revelation, interpreting this to mean that he is unable to continue working his job as a zookeeper due to his inability to look after the zebras. Meguro, driven to the brink of insanity, pulls out a knife and intends to attack Amane, but Yagami intervenes and rescues her. The black and white calamity is revealed to be the police cars that show up to arrest him.

Amane's third and final substory is The Fire Calamity,  where she warns a man about a fire calamity plaguing him, only for him to hit her and run off. Yagami follows him only to realize that the man is an arsonist bent on burning down Little Asia. 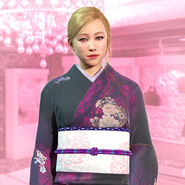 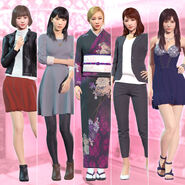 Add a photo to this gallery
Retrieved from "https://yakuza.fandom.com/wiki/Tsumugi_Amane?oldid=65414"
Community content is available under CC-BY-SA unless otherwise noted.