The Raging Bull of Tojo

Third Patriarch of the Nishikiyama Family

Tsuyoshi Kanda (神田 強, Kanda Tsuyoshi) is a supporting antagonist in Yakuza 3. He is the third patriarch of the Nishikiyama Family, a Tojo Clan subsidiary.

Kanda is a large, bald man who wears a beige suit jacket over his bare chest, with matching suit pants.

Kanda is an extremely short-tempered, hot-headed and impulsive individual. Out of the Tojo Clan lieutenants, he is the most reckless and direct, never hiding his questionable motives or wrongdoings. Kanda aims to rise to the position of Chairman and sees Kazuma Kiryu as an obstacle and an enemy to the clan. His rash and uncontrollable behavior often irritates his oath brother, Yoshitaka Mine, whom Kanda relies on to finance the Nishikiyama Family's activity.

As described by his underling, Nishino, Kanda has a fixation (or possibly a fetish) for giving rough massages to women, particularly chubby women. In order to find recipients for his massages, Kanda frequently sends Nishikiyama Family soldiers to prowl the streets of Kamurocho and coerce or bribe women into coming to the family offices so Kanda can massage them.

Kanda rose to the family patriarchy in 2007, following Koji Shindo's death. According to Makoto Date, his ascent was mostly due to the fact that he was the only Nishikiyama Family officer who was not involved with either Akira Nishikiyama or Shindo's attempted coups; since he'd been in prison serving time for sexual assault charges during both of them. He was the one who brought Yoshitaka Mine into the Tojo Clan after Mine offered to provide him with low interest, multi-million yen loans to finance his family's expansion. Mine would eventually split off to form his own family, the Hakuho Clan, and would become Kanda's oath brother.

By 2009, Kanda had become one of the clan's top three lieutenants, along with Mine, Goh Hamazaki and Goro Majima. In contrast to his co-lieutenants who were more methodical and strategical, Kanda was known for ruling his family through brute force and intimidation.

In 2009, after Daigo Dojima is shot, Kanda aims to succeed him as Chairman of the Tojo Clan. To that end, he plans to go to war against his rivals, the Kazama Family, to take all their territory in Kamurocho and thus give himself the money he needs to procure the chairmanship.

When Osamu Kashiwagi calls a meeting of the Clan's executives to discuss what to do while Daigo is in recovery, Kanda is in attendance. The Nishikiyama patriarch angrily opposes Kashiwagi's proposal that Kazuma Kiryu be brought back to serve as interim chairman, supposedly because of Kiryu's role in the fall of the previous two Nishikiyama patriarchs, but in truth because he sees Kiryu as a threat to his shot at the chairmanship.

In order to facilitate his war against the Kazama Family, Kanda orders his captain, Hasebe, to buy Club Stardust, through force if necessary, since its location would make it a perfect base of operations for the Nishikiyama Family's bellicose plans. Unfortunately for Kanda, the club's owners, Kazuki and Yuya, correctly deduce his motivations and refuse to sell. The duo are aided in driving away Hasebe and his goons by Kazuma Kiryu himself, who'd returned to Kamurocho to investigate the attempt on Daigo's life. As a result of Kanda's attempted hostile takeover, Kiryu decides to look into him as the primary suspect of the hit.

Kiryu eventually tracks Kanda to the Red Brick Hotel, where he'd been waiting for his men to bring him a random woman to forcefully massage. Along with Rikiya Shimabukuro, Kiryu confronts Kanda in his room. Shocked by Kiryu's sudden appearance, Kanda sets his men on the pair and flees through the love hotel, but he is eventually cornered at the luxury suite in the hotel's top floor. Kiryu and Kanda battle in the suite and Kanda is ultimately defeated. Under pressure with shoe on head, Kanda denies being involved in Daigo's attempted assassination and instead indicates that fellow Tojo officer Goh Hamazaki may be responsible, since he'd been conspiring with Kiryu's old enemies, the Snake Flower Triad.

After his humiliating defeat, Kanda meets with Mine at his penthouse to request more money to hire assassins to take out Kiryu. When Mine refuses, Kanda tries to threaten him by angrily destroying several pieces of priceless artwork which decorate his apartment. Mine, displeased with Kanda's behavior, scolds him for not understanding the value of the things he just destroyed. Kanda responds by attempting to attack him, only for Mine to reveal his superior strength by besting Kanda with a few punches. Mine proceeds to summon a few of his men and, with their assistance, he murders Kanda. Mine would later deliver Kanda's severed head to Kiryu as an apology for lending Kanda the money he used to cause trouble, much to Kiryu's horror.

Kanda relies on brute strength to attack his opponents. He can easily lift heavy objects and pull decorations installed into walls to use as weapons. 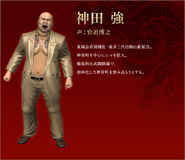 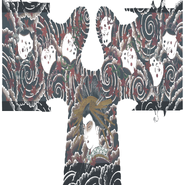 Kanda on an SSR Card in Ryu ga Gotoku Online