One of the few survivors of the 1980 Jingweon massacre, he and Yukio Terada were spared by Shintaro Kazama, then became a Japanese citizen, changed his name, and joined the Tokyo Metropolitan Police.

Kurahashi took Japanese citizenship and joined the Tokyo Metropolitan Police. Unbeknownst to him, Kawara was watching him the entire time. He, Yukio Terada, and Ryo Takashima plotted to destroy the Tojo Clan. Kurahashi and his men kidnapped Makoto Date to set a trap for Kiryu. Kurahashi reveals to Kaoru Sayama that Kawara is her father after shooting him. Kiryu and Kurahashi fight and Kurahashi is defeated, but manages to pick up a gun. He tries to shoot Kaoru, but Kawara uses his body to shield her and takes the bullet before shooting Kurahashi and killing him.

Kurahashi wears a light gray suit over white shirt and black tie. In Kiwami 2, his face is modeled after his voice actor.

On the outside, he appears as a somewhat level-headed police officer, but deep inside, he's a vengeful person, holding a great amount of grudge against the yakuza after the 1980 Jingweon massacre and wishing to avenge for his fallen brothers by blowing up Kamurocho.

Kurahashi appears to be a well-trained fighter. He uses a combination of kicks, evasions, and gun attacks, both while standing and ducking. 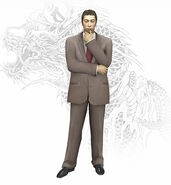 Body Render
Add a photo to this gallery
Retrieved from "https://yakuza.fandom.com/wiki/Wataru_Kurahashi?oldid=76922"
Community content is available under CC-BY-SA unless otherwise noted.