THE DRAGON OF DOJIMA RETURNS

Yakuza 3 (龍が如く3, Ryū ga Gotoku 3, lit. "Like a Dragon 3") is an action-adventure/beat-'em-up game originally released for the PlayStation 3 on February 26, 2009 in Japan and South East Asia, and on March 9, 2010, and March 12, 2010 in North America and Europe respectively. The game was developed by CS1 Team (now known as Ryu ga Gotoku Studio) as the third main installment (fourth overall) of the Yakuza series.

Much like all previous games in the main franchise, Yakuza 3 is primarily set in the Tokyo district of Kamurocho. However, this game also introduces Okinawa as a setting for the first time, featuring Downtown Ryukyu and Morning Glory Beach as explorable sandboxes.

In January 2007, immediately after the conclusion of the clash in Kamurocho, Kazuma Kiryu and his adoptive daughter Haruka Sawamura say their goodbyes to their friends. Kiryu then seeks out Goro Majima to ask him to rejoin the Tojo Clan and help out its newly-appointed sixth chairman, Daigo Dojima. Afterwards, Kiryu and Haruka move to Okinawa to run an orphanage.

In 2008, trouble looms when Morning Glory starts getting eviction notices from the landlords, the Ryudo Family. After a confrontation with its captain, Rikiya Shimabukuro, Kiryu has a talk with Patriarch Shigeru Nakahara, who intends to sell the land to Tokyo investors seeking to build a resort. Though the cash offer is sizable, Kiryu refuses.

Rikiya approaches Kiryu with a plea for help; Nakahara's adoptive daughter Saki has gone missing. The reason? To meet with her biological mother. However, Saki's Mother's boyfriend Tetsuo Tamashiro intends to use Saki as blackmail to make Nakahara hand over his land. Kiryu defeating Tamashiro foils that plan, and in gratitude, Nakahara chooses not to evict Kiryu and swears an oath of brotherhood with him.

Chapter 4: The Man in the Sketch[]

In 2009, Daigo and Nakahara are shot by a man with an uncanny resemblance to Shintaro Kazama, Kiryu's late adoptive father, together with a mysterious foreign agent. Determined to learn the truth about the man who shot both of them, and to avert a potential threat to the orphanage, Kiryu decides to return to Kamurocho. Despite Rikiya's insistence on joining him, Kiryu opts to leave him behind.

In Tokyo, Kiryu clashes with mystrious foreign agents on his way to Osamu Kashiwagi's office, where Kashiwagi is mortally wounded by an attack helicopter after telling Kiryu of Daigo being hidden in a hospital and saying there is a traitor in the Tojo Clan. To escape police questioning, he flees, and later reunites with his old friend Makoto Date.

Suspecting Tsuyoshi Kanda to be Kashiwagi's assassin, Kiryu and Rikiya - who had come to Tokyo regardless - seek him out. They make the Nishikiyama Family tell them of their patriarch's location and head to the Red Brick Hotel. Kiryu's suspicion turns out to be incorrect, as Kanda is not the kind of man who can plan out a hit.

With a lead that Majima Construction had been contracted by Minister Yoshinobu Suzuki to construct the resort, Kiryu travels to the Majima Family's headquarters in Purgatory to confront his old friend. In Purgatory, Majima tells Kiryu that he'll explain everything, but only if he defeats him once again in a fight at the Underground Coliseum. Amused, Kiryu agrees and defeats Majima once more.

Majima's deal with Suzuki was a setup by Goh Hamazaki wanting to divert suspicion from him, and Hamazaki's ally, the Snake Flower Triad, aims to take Rikiya hostage to lure Kiryu for assassination. Rikiya is saved in time by the mysterious Kazama lookalike who shoots the Triad leader Lau Ka Long in the head. The lookalike imparts a message to Kiryu before leaving: "Beautiful eyes. Like I heard from my brother before."

Defense Minister Ryuzo Tamiya tells Kiryu the lookalike is Shintaro Kazama's younger brother, Joji Kazama, who works for the CIA and seeks to push the development bill through. The development project, however, only serve the purpose of luring out Black Monday. Tamiya's secretary Toma learned of this and defected, making him a target for Joji, and Tamiya asks Kiryu to save Toma.

Back in Okinawa, Kiryu prevents Joji from killing Toma in one of the toughest battles he has ever fought in his life. Joji reveals that his partner was the one who shot Daigo and Nakahara, and because Daigo was opposed to the resort's development, they turned to Yoshitaka Mine, who wants to restore the Tojo Clan in accordance to Daigo's wishes.

While Kiryu was away, Mine and the Tamashiro Family demolished Morning Glory Orphanage and kidnapped Nakahara. Kiryu goes to the bullring where Nakahara is taken and rescues his oath brother, but negligence on Kiryu's part allows Tamashiro to shoot him, but the bullet is intercepted by Rikiya, who dies from the wound.

Kiryu travels to Touto University Hospital to rescue Daigo. He makes Mine see that his extreme methods are not going to give him the purpose he seeks. Having a change in heart, Mine chooses to atone by killing the leader of Black Monday, Andre Richardson, who was undercover as Joji's partner, and himself. After the dust settles, Kiryu is stabbed by a vengeful Hamazaki, but he recovers and returns to Okinawa.

Combat is still much the same as the previous two entries, with most objects on the streets usable as weapons in brawls. Heat actions and other upgrades are purchaseable with experience points gained as Kiryu levels up.

A chase is initiated when an enemy makes a run for it. The "Chase Gauge" on the lower right charts both characters' endurance, and whichever gauge is depleted first loses. In most chase battles, Kiryu is able to tackle his opponent in order to tire them out. This, along with running into objects, depletes the chase gauge faster to ensure Kiryu's victory.

Training with a mentor allows Kiryu to develop new abilities and hone his skills in battle. The following characters are available for Kiryu to train with:

Kiryu is able to learn new Heat Actions by observing and photographing inspiring events around Okinawa and Kamurocho and blogging about it from his cell phone.

Kamiyama runs a weapon & defense armor tune-up shop called Kamiyama Works located in downtown Ryukyu. By finding "recipies" for him to work from, Kiryu is able to obtain a plethora of different weapons and armor, as well as have them repaired and improved.

A remaster of the original Yakuza 3 was released on August 9th, 2018 in Japan, with the western version released digitally just over a year later on August 20th, 2019. It is available as part of the "The Yakuza Remastered Collection" pack, containing remasters of Yakuza 3, 4, and 5, with the latter two scheduled to be released in October 2019 and February 2020 respectively. The trilogy has also been available as a limited-edition physical box-set, released on February 11, 2020, and for PC via Steam and Xbox One, released on January 28th, 2021. The remastered version has a number of differences compared to the original: 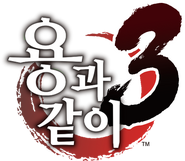