Yakuza 6: The Song of Life

How far would you go for family?

Yakuza 6: The Song of Life (龍が如く6 命の詩。, Ryū ga Gotoku 6: Inochi no Uta., lit. "Like a Dragon 6: The Poetry of Life") is an open world action-adventure video game developed and published by SEGA for the PlayStation 4. It was originally released in 2016 in Japan, later localized in 2018, and on March 25th, 2021 was released on the PC and Xbox One.

The game is the seventh main entry in the Yakuza series of action-adventure games. Like the first three games in the franchise, Yakuza 6 only features one playable character: series staple Kazuma Kiryu. Yakuza 6 is the conclusion to Kiryu's story arc; it is the final game to feature him as a playable character, as the next game in the main series, Yakuza: Like a Dragon, features a new main hero, Ichiban Kasuga.

After Yakuza 6 was released, Yakuza Kiwami 2 was released. Its engine, graphics and combat system are largely borrowed from Yakuza 6.

Yakuza 6 begins immediately after the events of Yakuza 5, with the events of the main story beginning in December 2016. The game features an open world set in the universe established by the Yakuza series. It focuses on the red-light district of Kamurocho, Tokyo, a fictionalized version of Kabukicho, Tokyo. The other location the game mainly takes place in is Jingaicho, Onomichi, a fictional rendition of a district of Onomichi, Hiroshima.

Chapter 1: The Price of Freedom[]

In December 2016, Kazuma Kiryu returns to Morning Glory Orphanage after willingly serving four years in prison to try to clean his slate. When he returns, however, he learns that his adoptive daughter Haruka Sawamura has been missing for three years. Feeling responsible for her disappearance, Kiryu travels to Kamurocho, where he learns Haruka is comatose following a hit-and-run, and was protecting an infant: Haruto Sawamura.

Kamurocho has become the site of a conflict between the Saio Triad, the Jingweon Mafia, and the Tojo Clan, and Kiryu's Tojo allies are all incarcerated while Akiyama is forced into hiding. With Haruto set to be sent to an orphanage, Kiryu kidnaps the infant to avoid that outcome. Kiryu's old friend Date turns up a lead suggesting Haruka may have fled to Onomichi for the past three years.

In Onomichi, Kiryu befriends local bartender Kiyomi Kasahara during his search for Haruto's father, and is frequently harassed by Tsuyoshi Nagumo of the Hirose Family. Nagumo develops respect for Kiryu after he saves him from a Yomei Alliance superior, and declares Kiryu his Aniki.

The Hirose Family all react strangely to being asked if they know Haruka, but Kiryu elects to wait for them to tell him what they know. He defuses some tension between the Hirose Family and the Yomei Alliance higher-ups, and as thanks, Nagumo decides to tell Kiryu the truth. Haruka had indeed been staying in Onomichi, and the townsfolk kept her identity a secret, but the identity of Haruto's father remains a mystery.

Kiyomi is kidnapped by Yomei Chairman Kurusu to have Kiryu bear witness to an oath between Yomei Captain Koshimizu and Tojo elite Someya, but he refuses, not wanting to betray the incarcerated Sixth Chairman. After the ordeal, Kiyomi states her suspicion of Shu Tatsukawa being Haruto's father, who is currently a host in Kamurocho.

Nagumo and Yuta accompany Kiryu to Kamurocho to look for Tatsukawa. A fight with the Jingweon leader and new Stardust owner Joon-gi Han gives them Tatsukawa's address, but when they get there, their lead ends as they discover that Tatsukawa is now nothing more than a rotting corpse...

The Saio Triad is the key suspect of Tatsukawa's murder. Kiryu, Yuta, and Nagumo are assisted by Akiyama in infiltrating the Saio HQ in Little Asia. After their cover is blown and fights break out, Kiryu confronts Saio officer Ed, who confirms he killed Tatsukawa. Saio ringleader Big Lo arrives, and allows the infiltrators to escape after muttering in Chinese that they do not know of the Secret of Onomichi.

Kiryu agrees to meet with Lo alone for answers, but Someya insists on following him. The reason becomes clear when they meet; Someya wants to kill Lo. Kiryu fights Someya, and Lo allows him to leave with his life. He tells Kiryu that there is no reason to gain answers on Tatsukawa, as he is not Haruto's father. Kiryu receives a distressed call from Yuta: Word has reached them that back in Onomichi, Patriarch Hirose took Haruto from Kiyomi and disappeared.

Back in Onomichi, Kiryu along with Nagumo and Yuta are confronted by the Yomei Alliance as they search for Hirose. They finally find him at Ryunan Shrine, and Hirose explains that he hid Haruto because the baby's significance to the ongoing underworld conflicts makes him a target for the Yomei Alliance. It ties back to the identity of Haruto's father, who Hirose reveals is none other than Yuta Usami.

Not only is Yuta Haruto's father, he is also the illegitimate son of Big Lo, and secret heir to the Saio Triad. Yuta immediately receives his first trial as a father when Haruto is kidnapped by the Jingweon. Though he is initially reluctant to follow, a lecture from Kiryu motivates him into rescuing his son. Haruto is rescued from Han, but just before the Jingweon leader can tell Kiryu of the Secret of Onomichi, he is assassinated.

Yuta and Kiryu travel to Kamurocho to negotiate with Lo. Yuta, however, enacts a suicide mission to take Lo with him to remove the danger to Haruka and Haruto. When Kiryu learns of this, he fights through a burning building to prevent Yuta from leaving behind Haruka and Haruto. Seeing what his actions pushed his son to do, Lo tells them that Hirose is the one they should look for, as the recent events originate from his conspiracy to protect the Secret of Onomichi.

The Hirose Family and Kiryu are able to unearth the Secret of Onomichi: The Yamato Mark II, a WWII-era battleship whose existence can cause severe turmoil for the Japanese government, and is the Yomei's leverage against the powerful politician Minoru Daidoji. Hirose, killed for failing his duty to protect the Secret, admits that his subordinates' parents were among those killed as part of his duty.

Haruka has finally regained consciousness, but the threats to her are still present. Kiryu takes down Tsuneo Iwami, but suffers grievous wounds in battle. With others unaware of his survival, he takes the opportunity to remove the last threat to Haruka: himself. To stop his family from being targeted, Kiryu forces Daidoji's successor to fake his death, exiling himself from the surface world to protect those he loves.

There are slight differences between the original PS4 version and the PC/Xbox One ports. While the graphical options accessible on PC are enhanced ala The Yakuza Remastered Collection, pre-rendered cutscenes are locked to 1080p and 30 FPS. 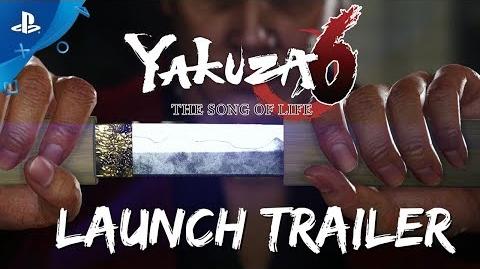