An Extreme Remake of the classic Yakuza

Yakuza Kiwami (龍が如く極, Ryū ga Gotoku: Kiwami, lit. "Like a Dragon: Extreme") is a remake of the original 2005 Yakuza. While the main story is largely the same, the new features of Yakuza Kiwami include: the graphics, engine and combat system of Yakuza 0; rerecorded voice acting; and new story elements not present in the original Yakuza, most prominently flashback scenes that chronicle the main antagonist's descent into darkness. Because of how the game runs on Yakuza 0's engine and makes much reference to it (unlike the original Yakuza), Yakuza Kiwami can be seen as a sequel to Yakuza 0.

Like the first Yakuza, the game is set in the fictional district of Kamurocho, designed after the real-life district of Kabukicho in Shinjuku, Japan. The events start in 1995, seven years after the events of Yakuza 0. From the second chapter onwards, the game takes place in December 2005.

Players can switch between fighting styles for Kazuma Kiryu, the main character, but because he has been in prison for a long time, he will seem weak at first. His strength will come back over time as the game progresses and Kiryu fights more. The game uses the same three battle styles used in the prequel Yakuza 0, alongside Kiryu's moveset which can also be selected. Each battle style has gained a unique ultimate move.

Yakuza Kiwami features a new Majima Everywhere system. This mechanic allows Kiryu to fight Majima Goro nearly anywhere in the game. The only way to power up the Dragon of Dojima style is through these battles, and the resulting bond it creates. Majima will not always be easy to recognize, however, and he has sworn to challenge Kiryu at every turn.

To help expand the story, Nishikiyama has additional cutscenes throughout that explore the events that occurred during Kiryu's time in prison.

There are additional hostesses of Kamurocho to romance. Yui Hatano of Club Jewel has no interest in the flirting and courtship that often comes with the Hostess territory. Rina Rukawa of Club Shine prefers women, and the beauties of the hostess business are the reason Rina took the job.

New to Kiwami is MesuKing: Battle Bug Beauties. A variant of the catfighting mini-game from 0, it is an arcade battle game featuring scantly-clothed insect women who battle for dominance of the forest. Pocket Circuit Racing returns from 0 as well.

Nishikiyama and Kiryu in the install screen for Yakuza Kiwami. 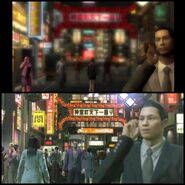 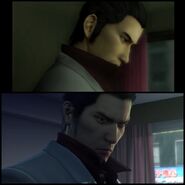 Yakuza Kiwami received "generally favorable" review on Metacritic getting a metascore of 80/100 on both PC[1] and PS4.[2]