Yayoi Dojima (堂島 弥生, Dōjima Yayoi) is a recurring character in the Yakuza series. She is the wife of Sohei Dojima, the patriarch of the Tojo Clan's Dojima Family, and they are the parents of Daigo Dojima. She appears only in one substory in Yakuza/Yakuza Kiwami. She then appears as a major character in Yakuza 2/Yakuza Kiwami 2, as the interim chairwoman of the Tojo Clan in the absence of Yukio Terada.

Yayoi is remarkably youthful looking, given that she is the mother of 30-year-old Daigo. She has the appearance of a traditional Japanese woman, wearing a kimono and donning a shimada (geisha) hairstyle. She has a fair complexion and a beauty mark under her lips. In some occasions, she can be seen wielding a katana.

As the interim chairwoman of the Tojo Clan, she's a considerable force to be reckoned with, leading the clan through war threats from the Omi Alliance, and against the Jingweon Mafia's grudge. She is a remarkably loyal wife to the late Dojima patriarch, at one point even confronting the legendary Kiryu himself planning to avenge Sohei, but eventually relented. Her loyalty to her husband was also revealed when Koji Shindo pointed out that Dojima had many mistresses, and Yayoi replied acknowledging this to be true, but she was still always faithful to him nonetheless.

She sets up an ambush in the Dojima Family Office for Kazuma Kiryu, believing him to be responsible for her husband's death, but after he defeats the ambush and stands face to face with her, Yayoi then realizes that Kiryu in fact took the blame for another person and let him go. By the time of the next game, it became common knowledge that Kiryu took the blame for Akira Nishikiyama, the true murderer.

Following the death of the Fifth Chairman of the Tojo Clan, Yukio Terada, Yayoi became its Acting Chairwoman. Trusting him, she tasked Kiryu with delivering Terada's request for peace to the leader of the Omi Alliance, but this was rendered moot thanks to the war declared on the Tojo Clan by a splinter faction led by Ryuji Goda, which was compounded by the Jingweon Mafia's attacks on the Tojo Clan.

During the Tojo Clan's own coup led by Nishikiyama Family Second Patriarch Koji Shindo, Yayoi was personally taken prisoner by Shindo who wanted to make her his own and his lover. Yayoi defied him, declaring her loyalty to her late husband, in spite of Shindo pointing out that he had many mistresses. She was eventually saved by Kiryu, Daigo and Osamu Kashiwagi.

By 2009, Daigo had become the Sixth Chairman of the Tojo Clan, and Yayoi retired. 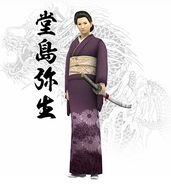