Sawa has black, shoulder-length hair that is pulled back and pinned loosely with a blue clip.

Sawa is shown to be a kind and compassionate individual who cares deeply for her students. Due to her history, she has no tolerance for bullying, and does all she can to prevent it.

This can often lead to her being rather short-tempered, especially when it comes to Yagami's investigation, and the revelation that Mami Koda is being bullied by other students in class 2-2.

Sawa attended Kurokawa Academy, where she shared the same homeroom class as Mitsuru Kusumoto, Yui Suzuki, Yasushi Akaike, and Shinya Kawai. Yu Kitakata was their homeroom teacher. She informed Kitakata of Mitsuru's bullying at the hands of his classmates, but he did not take the report seriously, jokingly telling the students not to take it too far. Around the time she graduated from university, she was invited to a high school reunion with her old classmates, but refused, unable to forgive what they did to Mitsuru, though she continued to visit the comatose Mitsuru in the hospital.

She became a teacher at Seiryo High School in 2017, aiming to prevent similar circumstances if they should happen to her own students, and that same year, her student Toshiro Ehara confided in her that he was being bullied by Hiro Mikoshiba. Sawa reported it to one of her superiors, but was told to not cause a disturbance that would prevent the third-years from graduating. She would offer moral support to him whenever she could, but it was not enough. When Toshiro eventually committed suicide, the superior asked through anonymous questionnaires if there had been any bullying, but any that correctly reported that there had been were disposed of, which she learned when she was called upon to testify. She was coerced into silence during the court case started by Akihiro Ehara which, due to the of the lack of tangible proof of bullying, was dropped. This decision wrought her with guilt and she frequently questioned whether she could have done more for Toshiro and his father.

Mikoshiba returned to Seiryo High after graduation to become a student teacher for his alma mater, and Sawa was his supervisor. Not forgetting what he did to Toshiro, Sawa treated him coldly. In mid-2021, Kitakata contacted her, asking for details about Toshiro's suicide. She told him of Toshiro's bullying and that she was made to deny the facts in court, feeling she could trust Kitakata as a teacher who underwent the same pains as her. Without her knowledge, Kitakata was recording the call and had decided to make Mikoshiba his next mark, using the recorded call to convince Ehara to avenge his son.

Sawa is brought into Yuzo Okuda's office and informed about the surveillance devices that were installed by Yagami and the others, later being shown footage of Mami Koda being bullied by her classmates. Sawa is prevented from interfering directly so that Yagami, Kaito, Tsukumo, and Sugiura can carry out the remainder of their plan, intending to provoke any bystanders into standing up for Koda of their own accord. Later, Yagami questions Sawa hoping to gather information related to Hiro Mikoshiba, but she does not initially answer him truthfully. The school is visited by Kisuke Watanabe, during which she learns of Mikoshiba's death. She asks to discuss the matter further at Plage.

Sawa begins putting the details of the puzzle together, and suspects that her former teacher - now known as Jin Kuwana - may be involved. She contacts him, and though he denies any involvement, he uses Yui Mamiya to warn her to not involve herself, handing her a picture taken of Mikoshiba before his death. Sawa hands Yagami the picture before walking off, scared out of telling him the truth about her past with Mikoshiba.

As Yagami continues his investigation and reveals more details of Ehara to Sawa, she finally tells him that she had been aware of the Toshiro's predicament, but the lack of evidence, along with the pressure from her superiors prevented her from taking proper action against it. She breaks down, as she feels guilt over not being able to prevent Toshiro ending up like her former classmate, Mitsuru Kusumoto.

Sawa later receives a phone call informing her that her apartment has been broken into, and she leaves the school to return home. Unbeknownst to Sawa, she is lured into RK's trap, who had intended to use her to get to Kuwana. Kazuki Soma holds her hostage in her home, but due to her close ties to the case and knowledge that could compromise them, she is killed by an ice pick at the base of her neck. Yagami, Kaito and Sugiura discover her body after Yagami is freed from Daimu Akutsu. 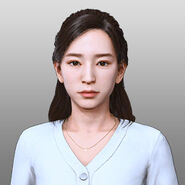