Yotaro Nakajima (中嶋 洋太郎, Nakajima Yōtarō) is a character featured in Yakuza 5. He is Kazuma Kiryu's employer at Nagasu Taxi.

All in all, Nakajima is a nice person, treating his employees like family and ensuring that everyone at the office is happy to be working with him, to a point where he takes Kiryu out to have some drink and go to a local hostess club.

Most of the time he wears a black jacket over a gray sweater and a white shirt, with matching pants and shoes. He wears a blue striped necktie. He has a five o'clock shadow on his chin.

A former street racer who lost his wife at an accident, he quit racing after realizing the sheer risk of such activity. Years before the events of the game, he founded the Nagasu Taxi Company, which has been in business for 30 years when the game takes place.

Six months before the events of the game, he finds Kiryu while out wandering around Hakata and gave him a job working for him as a taxi driver. 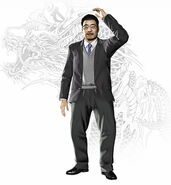 Nakajima's character bio from Yakuza 5
Add a photo to this gallery
Retrieved from "https://yakuza.fandom.com/wiki/Yotaro_Nakajima?oldid=75594"
Community content is available under CC-BY-SA unless otherwise noted.