In Yakuza 0, Yuki has difficulty in finding a job, despite the booming economy, as her reserved and honest nature does not lend itself well to job interviews. She came to work at Sunshine because Youda happened to find her alone and dejected at a park, and hired her on the spot; probably out of pity or desperation, as her timid personality and shyness around men are not traits one would typically look for in a hostess.

Yuki has a naive and gullible personality; she describes her ideal man as a typical high-fantasy prince, and believes in the possible existence of cryptids (specifically the Tsuchinoko). Because of this, both Goro Majima and Youda feel protective of her, and often treat her like a child. Despite their concern, Yuki shows throughout her story that she is independent and can make decisions on her own.

Yuki's superiors frequently ignore or insult her in a teasing manner, and she often gets into petty, childlike arguments with Majima. She takes the teasing in stride, however, switching between acting annoyed, laughing it off, or retaliating with her own sassy remark, depending on the situation.

Yuki first appears as the Number One girl of Club Sunshine, a cabaret club in Sotenbori, which is later managed by Goro Majima in order to assist in defeating their five rival Cabaret Clubs. Despite being the top girl at the club, Yuki is still new to the business, but grows to become a highly skilled hostess with the help of Majima, the club's owner Youda, and the other hostesses on staff.

Yuki returns as the owner of a different club, Four Shine. This time, Kazuma Kiryu is asked to oversee the club, in a replacement of the original hostess club management mission on Yakuza 2, which took place in Kamurocho.

She was once a hostess of legendary stature in the business, has retired, and instead owns Four Shine. While she hasn't aged dramatically in the eighteen years since Yakuza 0, she now wears glasses in order to see. As the Four Shine storyline progresses, she eventually rejoins the hostesses, becoming the lone Diamond-class on the roster. 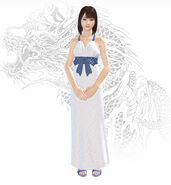 Yuki as a hostess.
Add a photo to this gallery 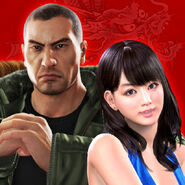 With Taiga Saejima.
Add a photo to this gallery

Retrieved from "https://yakuza.fandom.com/wiki/Yuki?oldid=77900"
Community content is available under CC-BY-SA unless otherwise noted.