Yukio Terada (寺田 行雄, Terada Yukio) is a supporting character in Yakuza/Yakuza Kiwami and Yakuza 2/Yakuza Kiwami 2. He is the fifth chairman of the Tojo Clan.

Physically, Terada appears to have a large build.

During his younger days, Terada is seen wearing a standard Jingweon operative outfit: an all-black outfit with a vest. In his later appearances, he is seen wearing either a standard business suit and tie or a trenchcoat over white scarf and a pair of dress pants.

As the fifth chairman of the Tojo Clan, Terada appears to be a terrible leader, as he made decisions that weakened the clan and hurt its image. In the year he was in charge, he surrounded himself with yes-men and pushed senior members aside from the clan. However, seeing as Terada always planned to destroy the Tojo Clan, its difficult to say how much of his apparent incompetence was his simply working toward his larger goal.

Terada proved an exceptional manipulator and strategist as he manipulated Kiryu and Ryuji in an effort to start a war that would destroy the clan. His plan also shows that Terada, like the rest of the Jingweon Mafia, is obsessed with revenge no matter the cost or how much time it takes to realize their goals.

He holds high loyalty for Shintaro Kazama. He proves this by trying to protect him from Shimano and his family in the original Yakuza. Even though he lived for the Jingweon Mafia, he revealed to Kiryu that he was grateful and touched by all that Kazama did for him.

Once a young hitman and one of the survivors of the Jingweon massacre in the 1980s, he and Wataru Kurahashi were spared by Kazama because of their young age. He took a Japanese citizenship and changed his name to Yukio Terada. Some time after the massacre, Terada swore an oath to the Omi Alliance and maintained a close relationship with both Jin Goda (Omi Alliance's fifth chairman) as well as Kazama, who asked Jin Goda to look after him. He spent most of the twenty-six years following the Jingweon massacre in service to the Omi Alliance, becoming its Chief of HQ as of 2005.

While a member of the Omi Alliance, Terada become very close to Shintaro Kazama in the Tojo Clan. He works with Kazama closely during the events of the first game. Terada shoots Futoshi Shimano dead after he throws the grenade that fatally wounds Kazama.

While he attempts to assist Kazuma Kiryu against Kyohei Jingu, he is betrayed by members of his own alliance who had secretly aligned with Jingu in order to take down the Tojo Clan. Following Jingu's defeat, Kiryu retires and appoints Terada as the Fifth Chairman of the Tojo Clan.

Shortly after the events of the first game, in February 2006, in an effort to rebuild the clan after the 10 billion yen incident, Terada announced that he is going to recruit a new captain. He ruled that the one with the most financial contribution to the clan will be the new captain.

Later on that same year, the Omi Alliance and the Tojo Clan were heading towards war because of Terada having left the former, strongly attempting to help broker a peace between the two organizations. While visiting Kiryu to seek out his advice, Terada was shot and killed by members of the Omi Alliance, ending his short tenure as head of the Tojo Clan.

In truth, Terada was actually a Korean named Daejin Kim, one of the survivors of the Jingweon Mafia who had been massacred by the Tojo Clan's Dojima Family 26 years previously. Terada faked his own death in order to manipulate Kiryu into trying to broker peace with the Omi, knowing that this would lead Ryuji Goda to try and take over the Tojo Clan in response. Along with Takashima of the Omi Alliance, they conspired to wipe out the Tojo Clan, which would allow the Jingweon to take revenge for their massacre 26 years previously. After revealing himself and being defeated by Kiryu, Terada was betrayed and shot by Takashima. With his dying words, he asked Kiryu to trust him. Kiryu chose to believe that this meant that his feelings towards Shintaro Kazama had been genuine.

When he fights Kazuma Kiryu in Yakuza 2 (and its remake), he wields a submachine gun, keeping his attacks at a distance while his men engage Kiryu in melee. 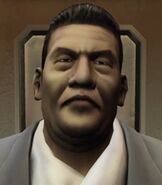 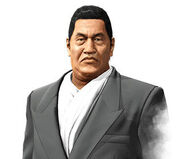 Close up of Terada 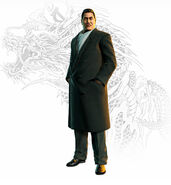 Add a photo to this gallery
Retrieved from "https://yakuza.fandom.com/wiki/Yukio_Terada?oldid=75729"
Community content is available under CC-BY-SA unless otherwise noted.