Okuda is an old man whose scalp is bare save for a small lock of hair at the center.

He wears a brown suit.

Okuda places great care in the overall well-being of his staff and students.

In 2018, Toshiro Ehara committed suicide. Investigators were unable to find any evidence related to Toshiro being bullied when his parents filed a lawsuit against the school. Due to online posts expressing the contrary, Okuda was not entirely convinced there was no bullying.

While concerned about bullying at his school, Okuda sees a sign for the detective agency Yokohama 99. He enlists the help of Makoto Tsukumo, Fumiya Sugiura, Takayuki Yagami, and Masaharu Kaito to investigate the school. To minimize suspicion, he does not inform the other staff, and gives the detectives a briefing of the situation at a restuarant.

When the detectives' surveillance reveals the bullying of Mami Koda in class 2-2, Okuda informs its teacher Yoko Sawa, who wants to intervene immediately, but that would expose the unauthorized surveillance. The detectives instead choose to use hidden speakers to help the other students stand up for Koda. Immediately after, Yagami receives a call informing him of Hiro Mikoshiba's death, and he questions Okuda about it.

To continue remaining at the school for investigation, Okuda suggests to Yagami that he join a club. Yagami chooses to become an outside counsellor for the Mystery Research Club, and Kyoko Amasawa has Okuda approve. Kisuke Watanabe questions Okuda and Sawa regarding Hiro Mikoshiba, leading Okuda to suspect he is dead. Yagami confirms Okuda's suspicion.

Yagami asks Okuda for Sawa's address, which he is reluctant to give due to privacy concerns, but Yagami suspecting Sawa being in danger causes him to reveal her address, and Yagami assures him he will not mention the chairman revealed private information. The next day, Okuda calls for a student assembly to break the news of Sawa's death. In his office, he expresses it is difficult for him to grasp the scale of Yagami's investigation but begs him to not stop until he can bring Sawa's murderer to justice. 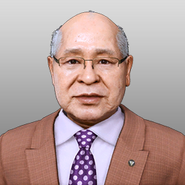